5 bike routes for the enthusiasts 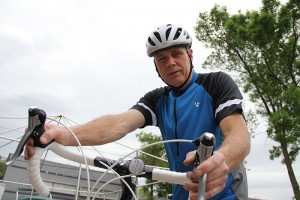 Albert Lea has a group of about 10 riders who get together every Wednesday evening during the warm months to ride their bicycles.

Martin’s Cycling & Fitness owner Scott Martin said they don’t just go for little 5-mile jaunts around the lake, either. These are road cyclists, the kind who like rides into the countryside and back. They pedal 20, 30, even 40 miles when they get on two wheels.

They gather at 6 p.m. Wednesdays at the bike shop, 1137 S. Broadway Ave. The bike shop is right at the bend where South Broadway becomes Southeast Broadway, near Hardee’s.

Martin, 51, has owned the store since it opened in 1981 and has been riding bikes since he was a boy. He has been into road biking for about a decade. Martin’s Cycling & Fitness has hosted the Wednesday night rides for seven years.

Martin said he looks forward to the

completion of the Blazing Star Trail to Hayward. Presently, the trail is a 6-mile dead end. After the work is finished in 2014, the trail would become a pleasant addition to the routes the road bikers enjoy taking.

He shared the group’s favorite routes, starting from the bike shop:

1. South on Southeast Broadway, east on Freeborn County Road 19 (South Shore Drive), south on County 26, west on County 13 through Glenville and continuing past the Poet ethanol plant and over Interstate 35, north on County 18, which leads to South Broadway and the bike shop. The ride is about 20 miles.

Also see four must-have accessories in the print edition of Albert Lea Magazine. Pick up your free copy at the Tribune office today!