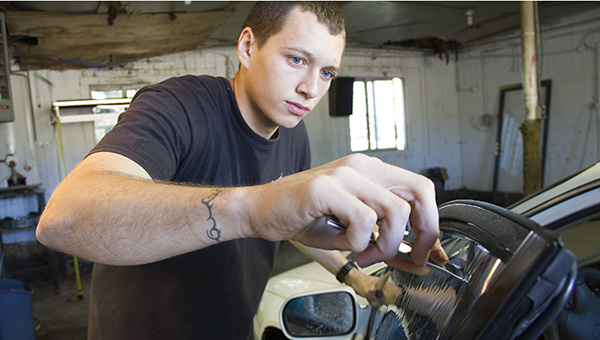 Dylan Bartel, owner of The Original Mr. Tint, cuts out a piece of window tint to fit the driver’s side window of a vehicle Friday in the work garage of the business. Bartel opened the business in June, following in the footsteps of his father, Dan Bartel, who owned the business in the 1990s. –Sarah Stultz/Albert Lea Tribune

When Dylan Bartel was growing up, his father, Dan, owned a business in Albert Lea that specialized in window tint.

Now, more than a decade later, Dylan, 22, has brought that business back with the same name and even the same sign.

The Original Mr. Tint reopened on West Main Street in June and is offering both installation and removal of window tint in automobiles, homes and businesses.

Bartel, a 2009 Glenville-Emmons High School graduate, said he has seen a variety of customers so far, though his most common customers are 18- to 35-year-old men. 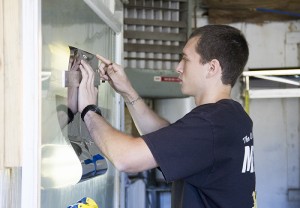 Though he and his one employee are busiest installing tint in motor vehicles, they tint windows for buildings, too.

They have also put in new tint at Taco King, along with some houses on Pelican Road and Lakeview Boulevard, to name a few.

“I really want to perfect the craft of tinting windows,” he said. “I want to let my work speak for itself.”

In the near future, Bartel said, he hopes to expand into buying and selling car stereos and remote starters.

He credits what he does to his father, who taught him the trade and who still tints on his own time.

“My goal is to build everything he had,” he said.

What does Minnesota law say about window tint? 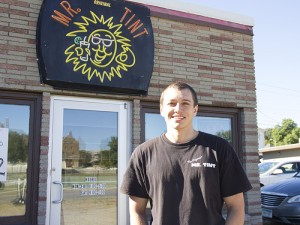 Bartel said in Minnesota cars can have 50 percent window tint on all windows — besides the front windshield, of course. That means 50 percent of light can get in.

Vans, SUVs and trucks can have 50 percent on the two front windows and then whatever the owner chooses for the back windows.

“I just make sure they know what is legal and what is not,” he said. 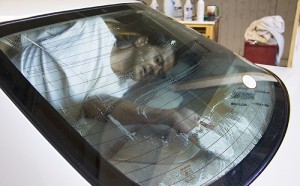 Robert Negron cleans the inside back window of a vehicle Friday at “The Original” Mr. Tint in Albert Lea after removing tint.