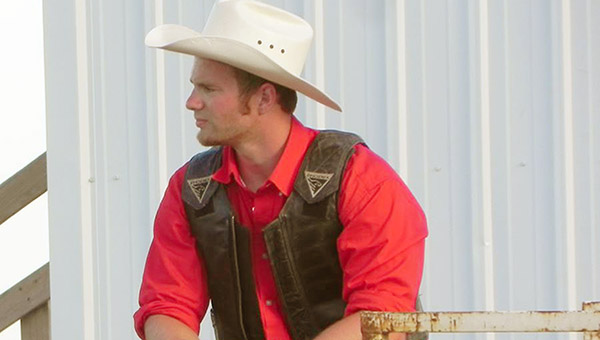 J.R. Linquist sits in the chute at the Winnebago County Fair in Thompson, Iowa. — Submitted

SCARVILLE, Iowa — With a heavy heart, J.R. Linquist prepared to follow in his father’s footsteps.

The Winnebago County Fair in Thompson, Iowa, held a rodeo with a bull-riding contest on July 20, and Linquist decided to enter. 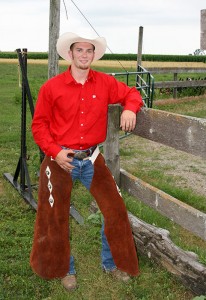 J.R. Linquist wears some of his riding gear outside the Farmers of Yesteryear arena north of Scarville, Iowa. — Micah Bader/Albert Lea Tribune

Linquist’s father broke the majority of his ribs when the horse fell back on him, and he suffered severe head trauma, he said.

Despite the abundant risks, Linquist decided he would compete in Thompson. So, he drove to the fairgrounds, put his hat on, buckled his chaps and sat on the bull inside the gate.

Before heading out of the shoot, he received tips from other riders.

“They just told me to stay on my hand,” Linquist said. “You basically sit on your hand, right between your legs, and you’re not supposed to take your eyes off the shoulder of the bull while keeping a stiff upper body and your toes out.”

He rode the bull for six seconds. The goal is to make it eight seconds, which is when a whistle blows.

“I told my mom that it’s a son’s job to carry a father’s legacy, so that’s what I did,” Linquist said. “I did it for him. It was quite an emotional ride.”

That first ride may have hooked him on the sport.

“It was awesome, a lot better than I expected,” Linquist said. “A 1,200-pound bull is wild and free, and it’s all in the palm of your hand. An adrenaline rush is an understatement.”

From the beginning, Linquist’s sister, Jackie, was supportive.

“She was excited about it and wanted me to do it,” he said.

However, the feeling was not universal among the rest of his family.

“They thought I was crazy,” Linquist said. “My mom, of course, was scared. She was scared out of her mind. She didn’t want me to do it, but she couldn’t tell me I couldn’t do it.”

After his family saw him ride, however, they all jumped on his bandwagon, he said.

Linquist said he doesn’t aspire to be a professional bull rider.

“I can’t see myself going that far with it,” he said. “I just think it’s too dangerous to do all the time. Maybe I’ll do it as a hobby — just for fun.”

“They’re legends. World champs,” he said. “They really made a name for themselves in this sport, and they were true cowboys.”

Since his first ride, Linquist also rode a bull at a rodeo in Sioux Center, and he plans to continue riding bulls.