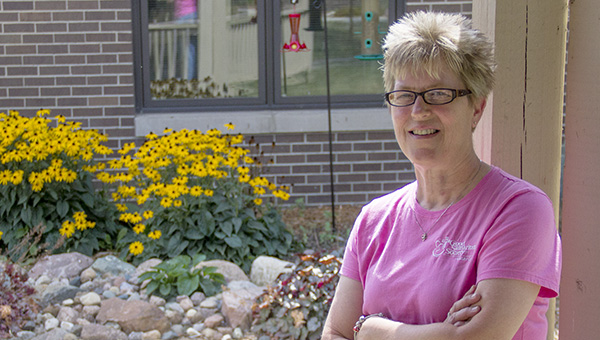 Maribeth Walton poses for a photo in a courtyard at Good Samaritan Society. As director of environmental services, she helped build the courtyard in 2011. –Kelli Lageson/Albert Lea Tribune

An employee at Good Samaritan Society of Albert Lea has won a statewide award for improving quality of life among residents and enhancing the working environment for co-workers.

Maribeth Walton, director of environmental services, has been working at Good Samaritan Society for just over 37 years. She started when she was 16 years old and never turned back.

Walton received the Employee of the Year Award from Care Providers of Minnesota, which represents more than 600 long-term care facilities in the state. It is awarded to one employee each year; nominations from co-workers, residents and family members are accepted. Walton will accept the award on Nov. 19 in Minneapolis at the annual Care Providers of Minnesota banquet.

“I was completely shocked,” Walton said of finding out she won the award. “There are so many other deserving people, too.”

Walton said she works with many other people who would be deserving of the award. Walton was also named staff member of the year in 2011 at Good Samaritan Society. Campus administrator Katie Davis said it’s a pleasure to work with Walton.

“This award is an excellent reflection of her work ethic, her passion for our residents and her dedication to living out our vision statement, which is to create an environment where people are loved, valued and at peace,” Davis said.

Walton is in her fourth year at director of environmental services. Before that she worked for 11 years making schedules for nurses and certified nursing assistants, and before that she worked for just over 23 years as assistant supervisor in the laundry department. In her current position she manages the laundry, housekeeping and maintenance. That’s for all three buildings including the main building with 108 beds, Hidden Creek assisted living with 24 beds and Bancroft Creek Estate with 44 apartments. She enjoys interacting with residents, and she’s not afraid to go out and mow the lawn or do anything she would expect her staff to do. She leads three maintenance personnel, five people in the laundry department and two in housekeeping.

As well as lawn care, Walton orders supplies, paints rooms and much more. She has also been a big part of the remodeling of the main building. Rooms are being renovated with new flooring and new bathrooms with showers, and Walton said there’s one specific goal for the renovations.

“We want it to feel like home,” Walton said.

One popular initiative of Walton’s was to let residents pick the paint color in their rooms. At first they were allowed to pick any color, but Walton said it would have been too difficult to keep all that paint around for touch-ups. Now residents can choose between seven colors, and Walton said they enjoy it.

Another project Walton helped with was the renovations of a courtyard at the main campus in 2011. It was plain grass, and with help she was able to transform it with flowers, plants and other features.

In her spare time Walton can be found golfing at Oak View Golf Course or playing in a pool league in Geneva. She also enjoys fishing. Walton grew up in Clarks Grove, one of five children of the late Howard and late Marian Boverhuis. Walton now lives in Albert Lea and is married to Shawn. They have six children: Cheyenne Lundak, 30, Isaac Walton, 30, Ashley Jacobson, 28, Kelsey Walton, 27, Mark Walton, 24, and Morgan Walton, 23. She also has six grandchildren.

In fact, when she was 16 and had just started at Good Samaritan Society she wasn’t sure about sticking with it after her first day. Her parents advised her to try it for two weeks, and those two weeks turned into 37 years.