Angel Hogate has been making her own jeans since age 14. 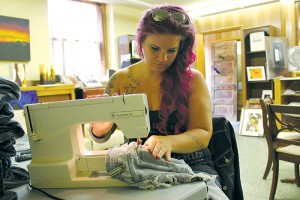 Angel Hogate works on turning a pair of jeans into Recycled Rockstars. Hogate has been in business since April. — Photo by Erin Murtaugh

Hogate would take worn jeans and repair them, turning them into something completely different. When her friend, Ryan Heath, saw what she could make, he suggested she could try to sell them.

Since April, the two have started up AR Customs Recycled Rockstars. AR stands for Angel and Ryan. They went back and forth between a name for the business. The name Recycled Rockstars came from Hogate’s catch phrase, “Be a rock star.” She said she has been using that phrase for a long time, and it just fit.

After inquiring what the customer is looking for as far as

colors and designs, Hogate begins the three-hour process that goes into each pair. After coming up with a design, she shreds the jeans and sews them with fabric, ribbon and other embellishments. The last step of the process is adding her logo to the jeans.

The pants can be made for all ages, and jeans aren’t the only thing AR Customs is making now that it has become popular. Hogate also makes T-shirts, shorts, jackets and overalls. 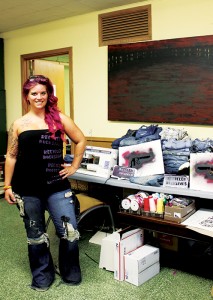 Angel Hogate stands in her work space. Hgoate spends about three hours on each pair of jeans.

Hogate has recently received a new sewing machine. Hogate’s grandma has been sewing for her entire life, and after seeing what Hogate can do, she decided to pass down her sewing machine.

“Everyone has been super supportive,” said Hogate.

Hogate has made jeans for people all over the world. From Florida to California and to Italy, where her brother is stationed in the military. Hogate started working in Heath’s photography studio, but has moved to her house where she can open up all the windows and crank up music while she works. Heath also helped Hogate turn AR Customs into a limited liability company.

“Without Ryan I wouldn’t be selling,” said Hogate. “He does a lot for the company.” 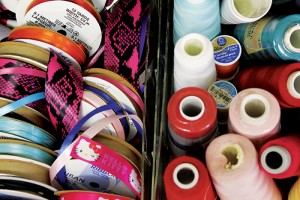 She planned to hire two interns, because she often has a

monthlong backlog of orders. Hogate still does all the design for each pair, but found she needed help with the amount of sewing needed in the process. Hogate has looked into mass production, but she doesn’t want to lose any of what makes her jeans unique. She’s still considering the possibility of opening a store someday where she could sell pre-made jeans, but for now she’s happy with her customer-by-customer basis.