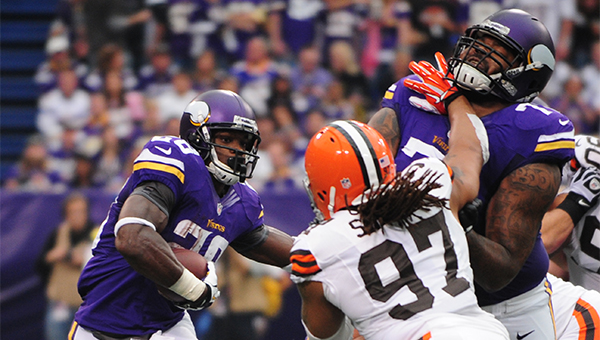 MINNEAPOLIS — Because of an 0-3 start, a mountain stands between the Minnesota Vikings and the playoffs.

Sunday’s 31-27 loss against a rag-tag Cleveland team was the latest bust. The Browns traded franchise cornerstone, Trent Richardson, the third overall pick in the 2012 NFL Draft, to the Colts for a future draft pick. To add insult to injury, Cleveland started its third-string quarterback, Brian Hoyer.

However, reminiscent of last week’s loss to the Bears, the Browns were able to mount a clutch drive to take the lead. Down by four points with 51 seconds left, Minnesota wasn’t able to replicate the late heroics.

“I don’t feel like we as an offense made some plays, especially when it mattered most,” said Minnesota running back Adrian Peterson.

To right the ship, the Vikings hope to get back to what led them to the playoffs last year: Peterson’s 2,097 rushing yards, said Minnesota right tackle Phil Loadholt.

“The whole offensive line as a unit takes pride in his success,” Loadholt said. “We just need to continue to work on that, and we’ll have more success.”

Loadholt and Minnesota’s offensive line paved the way for Peterson to gain 88 yards rushing and a touchdown, despite running behind a third-string fullback. The Vikings offensive line sustained blocks during two touchdown runs on a pair of quarterback keepers by Christian Ponder, but Peterson said he is looking for more consistency.

“They did a good job and they executed on those runs,” he said. “That’s what we need more of.”

Besides being teammates on the field, Peterson and Loadholt share college roots. However, because Peterson entered the 2007 NFL Draft as a junior, the duo missed each other by one year at the University of Oklahoma. They still enjoy talking about their alma mater, though.

“We both represent Oklahoma, and I’m very proud to be a Sooner,” Loadholt said.

Peterson knew Oklahoma’s next opponent on Saturday without being told, and he said he’ll be pulling for the Sooners to beat Notre Dame.

Loadholt signed a contract during the offseason to stay with the Vikings through 2016.

“I wanted to make the right decision for myself and for my family,” he said. “I felt that this place was the best for me. I enjoy playing for these coaches and I enjoy my teammates here — just the whole state of Minnesota.”

The Vikings plan to move to a new stadium next year.

“I’ll be sad to see it go,” Loadholt said. “It’s my first NFL home stadium, but I’m excited to see the new one, and we’ll go forward from there.”

So far this season, Minnesota has given up more than 30 points in each game. Next, the Vikings will look to bottle up Pittsburgh in London, England, Sunday at noon. The Steelers are coached by former Vikings defensive coordinator Mike Tomlin. Pittsburgh is also looking for its first win of the season. Both teams give up 119.5 yards rushing. However, the Steelers secondary gives up fewer than 200 yards per game passing, while the Vikings have allowed more than 320 yards per game.