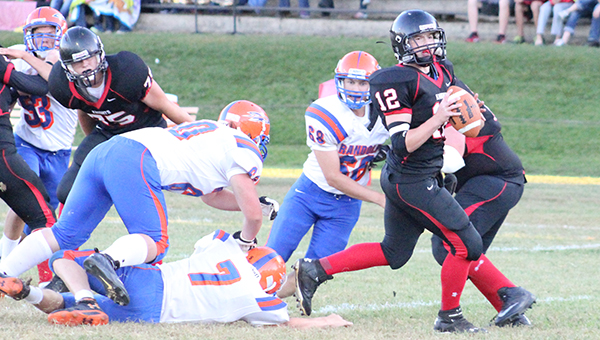 ALDEN — It wasn’t a win, but in the end a close loss was something that Alden-Conger head coach Bruce Smith had no problem with.

The Knights fell 26-14 to Randolph on Friday night at home.

“It was definitely our best game this year, I’d say our best game in the last couple years,” Smith said. “I’m really pleased with the way the guys played. I told them after we got done here I said, ‘You’ve got nothing to ashamed of.’ They played one heck of a game.” 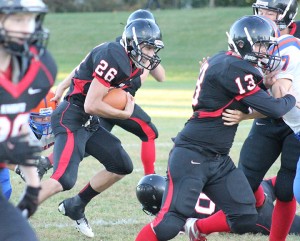 Alden-Conger was the first team on the board. After a scoreless first quarter, Matt Erickson took a handoff in the red zone and found the end zone. Erickson also converted the two-point conversion on the ground and gave the Knights a 8-0 lead.

Randolph found the end zone a few minutes later but did not convert their two-point conversion. On the next Alden drive, a Randolph player stripped the ball away from an Alden-Conger running back and scored on the play, making it 12-8 in favor of Randolph.

Alden-Conger was able to gain the lead back when quarterback Brady Neel found Wyatt Ladwig on a 11-yard touchdown pass, which gave the Knights a 14-12 advantage. Alden-Conger’s offense looked really good on the second touchdown drive, in which it marched down the field.

“The last two games I’ve been pleased with the way we have been moving the ball,” Smith said. “We’ve competed with the last two teams here.”

Things fell apart right before the half.

Randolph broke a long touchdown run and then was able to recover a muffed squib kick on the ensuing kickoff. Shortly after they recovered the muffed kick, quarterback Luke Dubbels hooked up with Hunter Ehlers on a long touchdown pass.

Alden-Conger was able to mount a promising drive right before halftime, but it stalled out in the red zone.

Neither team was able to produce anything offensively in the second half.

Alden Conger’s defense was strong on Friday night: the Knights forced and recovered three fumbles in the first half.

Smith said that this close loss, along with the previous week’s close loss to Cleveland, was something that Alden-Conger could build on in the quest to notch one in the win column.

“A lot of our losses have been by 40 points or more,” Smith said. “And these last two games against Cleveland and now tonight against Randolph it’s been 12 points, two touchdowns.”