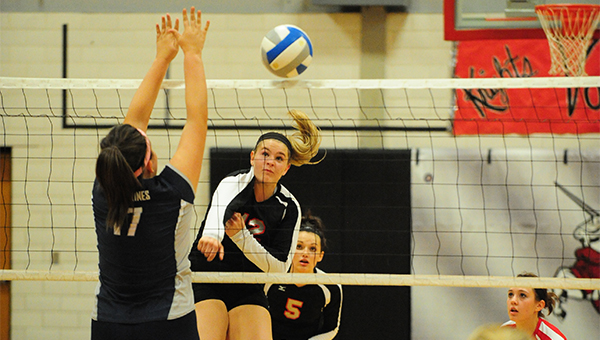 Brooke Reyerson of Alden-Conger spikes the ball over the net Monday against Glenville-Emmons. The Knights won 3-0. — Micah Bader/Albert Lea Tribune

ALDEN — The Alden-Conger volleyball team is hitting its stride with only four matches left in the regular season. 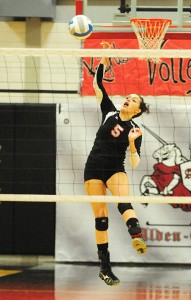 Brittany Waters of Alden-Conger spikes the ball from the back row Monday against Glenville-Emmons. Waters earned a game-high 14 kills. — Micah Bader/Albert Lea Tribune

After winning the eight-team Le Roy-Ostrander tournament on Saturday, the Knights kept the momentum going by sweeping Glenville-Emmons 3-0 on Monday.

“It’s great to see the kids playing together as well as they are right now,” said Alden-Conger head coach Jolene Bute. “My favorite part of the whole thing is getting the pieces together to get a swing going into the postseason.”

Alden-Conger and Glenville-Emmons played a pair of close games two days prior to Monday’s showdown at the Le Roy-Ostrander tournament. The Knights edged the Wolverines 25-22 and 26-24. Monday’s match had the same result, but this time Alden-Conger controlled the first two games from start to finish — 25-9 and 25-10 — and rallied for a 25-21 win in Game 3.

Coach Bute said part of the difference was the home crowd.

“We had great fan support, and that always helps, too,” she said.

In Game 3, Glenville-Emmons built an 11-9 lead, capped off with an ace serve by Madi Ziebell. 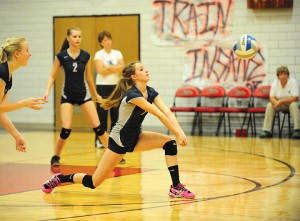 “We were fired up in the last game, and you can see how much better we play when we’re fired up,” said Glenville-Emmons head coach Lisa Ziebell. “It took us a while to get rolling.”

However, the Knights countered with a 16-10 run to complete the sweep.

“We had the lead until we missed three serves in a row,” coach Ziebell said. “You can’t do that against a team like this.” 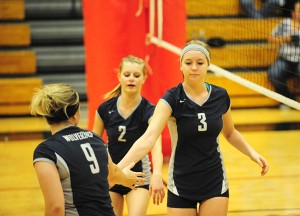 Alden-Conger was able to build those leads on sets by Erika Bute who had a game-high 17 assists. Many lobs were to Brittany Waters and Brooke Reyerson at the net. Waters had a game-high 14 kills along with five digs, two ace serves and a block. Reyerson added five kills and four digs.

Reyerson and Waters are five years older than Bute, a seventh grader, but the trio showed chemistry on the court.

“We’ve been gelling as a team, keeping the ball in play and working on having more consistency though our whole game,” coach Bute said.

Glenville-Emmons was led by Ziebell and Rieley Madson. The pair tied with a game-high 15 digs, and Ziebell earned a team-high eight kills.

The Knights began the season 2-3 but went didn’t win in their next seven outings. However, Alden-Conger got back on track with four wins and a tie since Sept. 24.