“Life on the farm is impossible. Mom is never in the house.” — my sister JoLynn, at age 9, describing to one of her friends what it’s like to move to a farm.

I shared similar sentiments with my sister when our mother jumped into business ownership with our father, buying a potato farm in Aitkin County in 1987. None of us was in the house much.

While pretending I was on a chain gang in a thistle patch during the first summer, I sliced a chunk of skin out of my heel with a sharpened hoe. I may have been swinging it too haphazardly, but that detail is fuzzy. What is crystal clear is my memory of hobbling down the field road to my mother on a bloody flip-flop, expecting her usual sympathy and an offer to bandage it. Instead, she yelled at me over the noise of her tractor to dress it myself and then put potatoes on to boil for lunch. As I limped back to the house alone, I sniffled to myself with righteous indignation that I had become little better than an orphan.

Of course, my two sisters and I eventually adjusted to our mother’s new schedule. 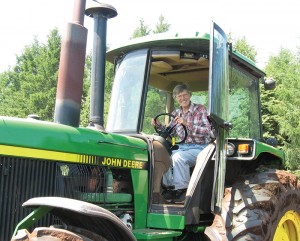 Jennifer Vogt-Erickson’s
mom, Markell Vogt, poses
for a photo in her tractor. — Submitted

I recently asked my mom to reflect on her 28 years of experience in the potato business while we were on an 800-mile road trip. My mother could out-talk Rush Limbaugh, so this is a substantially abridged version of her responses.

Things that prepared her for business ownership:

She and my dad both grew up on farms. She worked with many types of machinery as a teenager, so she was comfortable around equipment. She also gained

experience hiring and training people when she worked as a camp director.

Best advice she received from other women when entering the business: Learn how to operate all the labor-saving machinery you can. Women can run levers as well as men can, but women aren’t as physically strong as men are when it comes to manual labor. Save your back.

Advice she would give to a woman entering the business today: It’s a lot more common for women to handle the books now. If the woman does the bookkeeping, she should make sure her partner knows the financial picture for the business before the partner makes any major purchases or decisions, and she should put her foot down when

necessary. This sometimes upsets my dad, but he reluctantly admits it’s better than spending money he doesn’t have.

Best things about the business: She and my dad have dozens of local customers who come back year after year, and they highly value the farm-to-consumer relationship. They feel good about selling a nutritious product. They have also worked with many great employees over the years. They try to be good stewards of the land by reducing their use of chemicals and building up the soil naturally. They like being independent but also have to be prepared to take the lean years in stride. It takes a lot of faith.

Things she has done that she never expected she would do:

Rebuilding the potato warehouse in her mid-60s after the original one burned down in 2009. (Her daughters also did not expect this.)

Things she would do differently if she had to do it over again: She would have worn hearing protection from day one. She also would have switched to computerized payroll right away, and she would have hired

somebody to do the farm taxes for the first couple years until she felt comfortable with it. She would have encouraged my dad to update machinery faster instead of repairing old machinery that kept breaking down, often at the most inconvenient times.

There are new farming methods and marketing techniques that would have been appealing to them when they were younger. They have met people who now grow a variety of vegetables using high tunnels, which allow for a longer growing season. My parents would have been interested in selling at farmers markets and expanding on-farm sales.

Finally, my mom wishes she would not have worked her daughters so hard. (Much as we have tried, my sisters and I have yet to discover any psychological injuries from our parents overworking us as juveniles. We should probably admit this to her.)

What she is hoping to accomplish: She wants to get back into local grocery stores with five- and 10-pound bags of potatoes, if she and Dad can replace the expensive bagger they lost in the fire. Retirement is not on the list yet because Dad thinks he’s just getting the hang of farming.

Jennifer Vogt-Erickson taught social studies in Albert Lea for more than six years before staying home to raise children. She lives with her husband, Jeshua, and their two young children, Trixie and Axel. She wrangles toddlers by day and writes by night.