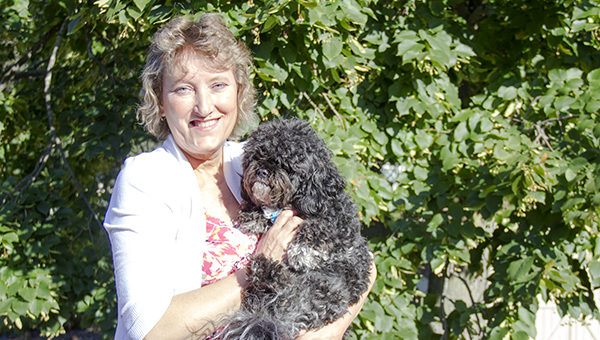 Jackie Williamson considers herself rich because of the love and support of her family, and knowing that has helped her through some rough times recently.

Williamson feels she’s now on her path to recovery after multiple surgeries and reappearing cancer. It all started during a regular mammogram in 2005.

Doctors detected a lump in her right breast. She had a lumpectomy, and doctors took some lymph nodes out as well to check for cancer. It was there, too. Then it was eight rounds of chemotherapy and 32 treatments of radiation. She was cancer-free.

“Then I was fine until October of 2011,” Williamson said.

Cancer returned to her right breast, and more cancer was discovered in her left-side lymph nodes as well. She began chemo to try to shrink the cancer, but her blood levels fell and she wasn’t able to continue treatment. That meant surgery again.

It took three surgeries, all in Rochester, to finally be rid of cancer. Then 32 more radiation treatments. She was glad be treated in Albert Lea and not have to drive to another city each day.

The following October, in 2012, cancer had returned, this time in her left breast. She had wanted to have a mastectomy of that breast at the same time as her last surgery, but she had been too sick. This time, surgery went better.

“It was a piece of cake compared to the other,” Williamson said.

And she was cancer-free again. That is, until March of this year.

Williamson said she could feel a lump in her chest, so she went to the doctor. They found cancer in her chest, hip and lung after a positron emission tomography scan. She still didn’t have the right blood levels to get chemotherapy through an IV, but doctors wanted to try a chemo pill before more surgery. In August, she went in for another PET scan hoping that the cancer had shrunk some. To her surprise, there were no signs at all of cancer.

“It was a miracle for me,” Williamson said.

Williamson said she was lucky to have the support of her husband, Brad. Her children and sisters have been supportive along the way, too. But all those doctors visits, treatments and surgeries did wear on her.

“I went through a real dark time,” Williamson said. “The only thing I could concentrate on was dying.”

She was also worried about her family and how they would get on if she wasn’t around anymore. With more support from family and talking with a therapist, Williamson was able to start concentrating on being alive.

“I just appreciate every day,” Williamson said. “The therapist helped me realize that sure, it could spread, but there’s a chance it won’t, too.”

She appreciates the small things in life so much more now, like clouds in the sky or looking at the stars at night. She also makes sure to tell her family she loves them and what they mean to her whenever she can.

“It turned my whole well-being around,” Williamson said.

Williamson is trying new things with her diet and lifestyle, which have been helping. She likes to get massages once in a while and eat natural and unprocessed foods. There are still struggles, like that her chemo pill makes her hands and feet ache or make her skin crack and peel, but she still works to be positive.

“It makes you really look at life differently,” Williamson said.

She’s also thankful the support from her workplace, City & County Employees Federal Credit Union in Skyline Plaza. She has worked there for 21 years as a service representative and loan officer. Williamson is from Mapleview and met Brad when he was working in Austin. They married and moved to Albert Lea; in October they will celebrate their 30th anniversary.

In her spare time, Williamson enjoys walking, music and photography. Her husband said he thought adopting a dog would be therapeutic for her, and that’s how they ended up with Bella, a 3-year-old Shih Tzu and poodle mix.

A benefit will be from 4 to 7 p.m. Saturday at Green Lea Golf Course. All donations and proceeds will go toward Williamson’s medical and family expenses. There will be a dinner, silent auction, bake sale and entertainment by Three Lane. A nine-hole, two-man best shot golf event begins at 2 p.m. Donations can be sent to City & County Credit Union, 1719 W. Main St., Albert Lea.

Williamson said it was originally hard for her to agree to a benefit. Her family and friends helped her realize that holding a benefit would give others a way to help her.

“They said ‘everyone wants to help you,’” Williamson said.

Williamson said she is impressed by the community and thankful for all the people who came together to plan the event.

Interesting fact: Williamson enjoys taking photos so much she has boxes and boxes full of family albums.