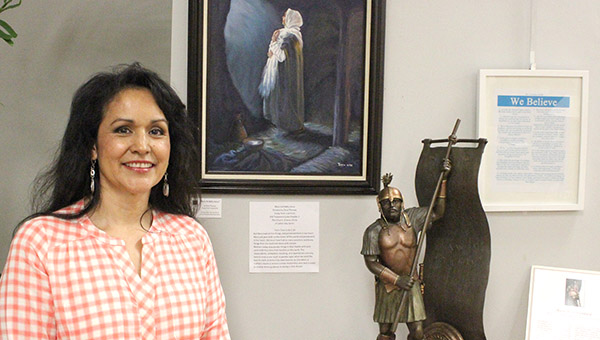 Dora Thomas poses for a photo next to a painting she created. The painting, the sculpture next to it and a few other pieces are on display at the art center on loan from The Church of Jesus Christ of Latter-day Saints. –Kelli Lageson/Albert Lea Tribune

Every church in Albert Lea has objects that could easily be considered works of art. That was the idea behind the latest exhibit at the Albert Lea Art Center.

There are traditional pieces like paintings, photos and drawings, but then there are so many more objects that churches use in rituals that can be considered art. There are altar cloths, chalices, banners, quilts, wood carvings, crosses and offering plates, among others.

“There’s a wide variety of handmade things,” said Tom Mullen, Art Center member. “Each church is different in terms of the types of things they use for rituals.” 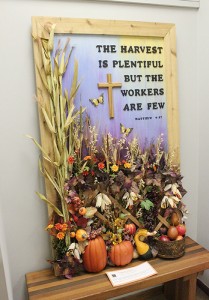 This piece is on loan from Crossroads Church. The work was done by Sue and Jerry Westrum.

Mullen called area churches to see if they would be interested in contributing anything to the exhibit. He was surprised by the large variety of items that came in. There are Bibles, elaborate candlesticks, detailed paintings, handmade stoles and banners that reflect different religious holidays and even a metal sculpture.

“It makes it more interesting to see their similarities and differences,” Mullen said. 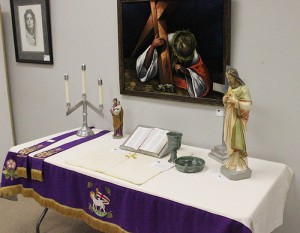 There were at least nine Lutheran churches represented in the show, but Mullen said he wanted to try to include everyone. There is a small exhibit from The Church of Jesus Christ of Latter-day Saints, and other pieces were provided by area Methodist, Presbyterian and Catholic churches, as well as other denominations. 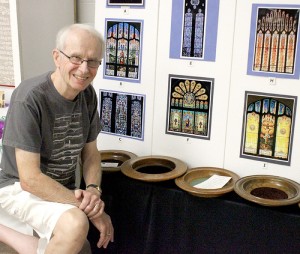 Individuals were able to contribute anything faith-related, so there are pieces that include a menorah and dreidel from a Jewish woman. The Freeborn County Historical Museum got involved, too, and contributed photos of old churches and church celebrations from many years ago.

Mullen worked on a feature for the exhibit. He went around to a few area churches and took photos of stained glass windows. Visitors to the exhibit can try their hand at a quiz to see if they can differentiate between the stained glass photos.

There are other interesting pieces, including something on loan from New Life Christian Church. The church helps a tribe in Papua New Guinea, and the tribe wished to thank the church. It has no written language, so tribe members made a wood carving and sent it to the church in Albert Lea.

“I’m happy we have so many of the churches involved,” Mullen said. “It’s a good variety of art forms.”

There is one multimedia feature, as well. Exhibit viewers can listen to an audio recording on the history of religion development in Freeborn County by the late Bidney Bergie.

The exhibit is called “Art & Faith.” The Albert Lea Art Center is open from 10 a.m. to 2 p.m. Tuesdays through Fridays. The exhibit runs until Oct. 11. It is free and open to the public.

The Albert Lea Art Center was loaned pieces from area churches and private citizens. The participants are as follows:

• The Church of Jesus Christ of Latter-day Saints

What: Art & Faith exhibit at the Albert Lea Art Center

Where: 224 S. Broadway. The Art Center has entrances on Broadway and at the back alley; there is no parking on Broadway right now due to construction.