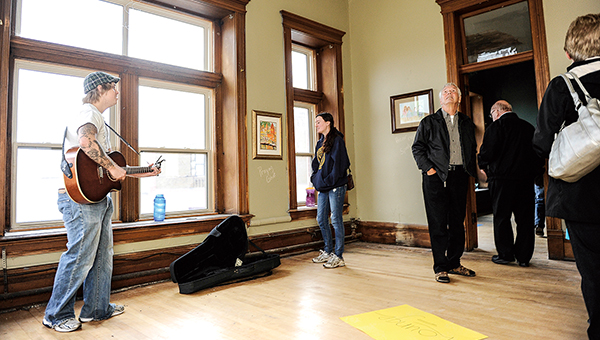 AUSTIN — Area residents were greeted with paintings, possibilities and a little wine inside the old bank building on Second Avenue and North Main Street Tuesday afternoon.

The Austin Area Commission for the Arts showed the space off in an open house to give residents a taste of the artistic possibilities a downtown Austin art center could hold for the city.

“We’re pushing this project forward as quickly as we can,” said Jennie Knoebel, the commission’s executive director.

Knoebel said the location, measuring about 6,600 square feet, would offer three floors of arts to residents. Volunteers will likely man an art gallery, shop and wine bar on the main floor, with classes and the commission’s administrative offices held on the second floor. Commission officials say the basement will likely contain a kiln and be used for pottery, sculpture and other intensive art mediums.

“The possibilities are limitless,” said Dave Sylte, commission board president.

The open house contained paintings and artworks from various area artists as an example of what the Art Center could hold, though Knoebel said there was still plenty of work to be done before it could open.

One such task is a merger between the Commission for the Arts and the Austin Area Arts Center. Both organizations were looking into joining together earlier this year, but officials from both groups didn’t know whether the move would prove beneficial to the art center. Knoebel said the commission and the Art Center will likely merge at some point in the future once paperwork is completed.

Several residents said they were impressed by the changes to the building.

“It’s great they’re fixing up this building and doing something with it,” said Jessica Williams. “I’ve always been curious about this building, seeing it from the outside. To see that something’s being done with it is a good use of space.”

Williams said she supported the idea that local artists could show their works at the new location and may sign up for an oil painting class, though she had never thought to do so before.

Knoebel predicted the new place will be ready to open by the end of the year.