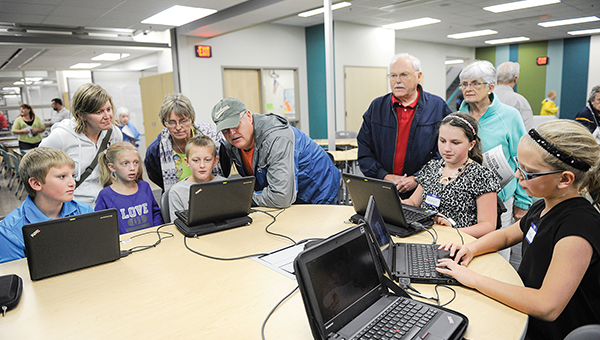 Students show off a computer workstation in one of the classrooms to people touring the I.J. Holton Intermediate School Saturday afternoon. –Eric Johnson/Albert Lea Tribune

Students, parents, family members and curious Austinites packed the halls and classrooms of I.J. Holton Intermediate School Saturday afternoon as the district celebrated the opening of the school. 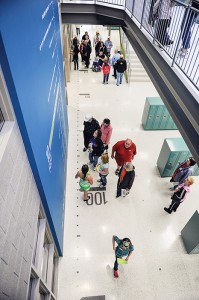 People wander throughout I.J. Holton Intermediate School Saturday during an open house for the new school.

Classes started Sept. 3, but the open house was the first chance many had to see the first new school in decades for the Austin district. Among those to get their first glimpse was Ann Holton Patarella, daughter of the school’s namesake, who spoke at a ribbon cutting ceremony before the open house.

“I remember walking in and thinking, ‘Wow.’ It’s just gorgeous,” Holton Patarella said. “It’s just so nice there’s going to be something physical here in Austin. It makes me feel as if he’s still around in town.”

“Education was extremely important to our dad,” his daughter said. “I think he was very proud when all three of his children graduated from college. He just always felt you continued to learn your whole life.”

Also in attendance were I.J.’s two other children, Brooks Holton and Janet Holton.

“We’re still debating what he would have thought about it because he was so modest,” said Brooks about a school being named after his father. “But I think he’d be as pleased as he could be. He believed in education wholeheartedly.”

The district proposed building a new school in 2011 to combat overcrowding following a study that found the district would likely add 400 students as soon as 2015, based on Mower County birth rates.

The district broke ground on the school in May 2012 and put finishing touches on it this month.

Superintendent David Krenz said the community has given a tremendous amount of support throughout the process.

“It’s the fact that they trust what we’re doing with the kids is positive, and it’s going to move them forward,” he said. “And I think that shows a lot about how the community feels and supports education.”