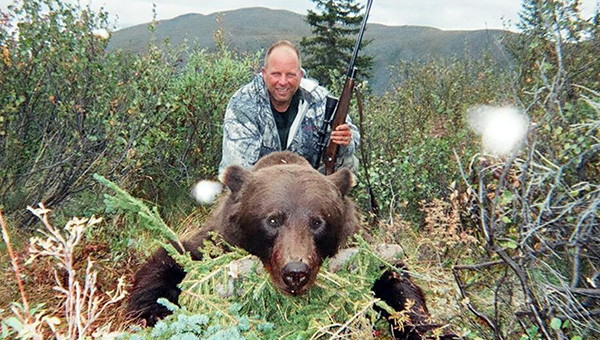 Beginning last spring, every morning at 3 Bob Ball climbed out of bed in his Albert Lea home, gathered up his Labrador retriever, Eleanor, and stepped outside, walking at first, then running, two miles in all.

“I wanted to get in shape for the hunt,” Ball said. “I didn’t want to go all the way to Alaska and be too tired to move around.”

Booking an adventure that in its primitiveness wasn’t much different from if it had been taken a century ago, Ball returned to Alaska in August for the second consecutive year.

“Last year, I had moose, caribou and grizzly tags, and I only filled my moose tag,” Ball said. “When I left, I was determined to get back up there. I had dreamed about bear hunting since I was a kid, and when I didn’t get a bear in Alaska last year, I felt empty. So I went back.”

It’s not uncommon to spend as much as $25,000 on Alaskan big game hunts, depending on the length of the outing and the number of species pursued.

To raise money for his return trip, Ball clocked overtime last winter at his job as a power company line foreman. As a bonus, his wife, Laura, was supportive of his effort.

So it was on the morning of Aug. 26 Ball found himself in a spike camp in the middle of nowhere, Alaska, accompanied by a single guide, 32-year-old Dave Doxey.

“He cooked; I did dishes and chopped wood,” Ball said. “This was an old-school hunt. We didn’t have generators or any of that stuff. We did things the hard way, the same way guys did them in the 1940s.”

Glassing from a ridge not far from camp, Ball saw moose and caribou on his first day of hunting. But no bears.

He held a caribou permit and would take one if the opportunity arose.

But he had come for a bear, and in that respect this pilgrimage north was a different kind of trip, with broader significance.

Accomplishment was the trophy he sought as much as any, and toward that end, he was of sound body, in big country and, not incidentally, dead-on with a .300 Winchester Magnum.

Now he needed a bear.

“On our third day, we climbed a mountain east of camp and found a nice caribou just shedding its velvet,” Ball said.

Hours later, the animal, downed with a single discharge, had been caped and its meat deboned, so that everything fit into two backpacks.

Clambering down the mountain, back to camp, Ball and Doxey were eager to cover the bottom of a frying pan with the caribou’s back straps.

“The trip wasn’t all hunting,” Ball said. “At night around the campfire we played cribbage.”

Then, the elusive grizzly

The next day, Doxey spotted a grizzly, a legal boar.

Aided by a favorable wind, the two hunters quickly closed the distance between themselves and the big animal.

This was in brushy, alder country, and the men were able to hide their presence from the bear.

But so, too, did the foliage create cover for the bear, which alternately appeared and disappeared.

“When we reached an opening, a meadow, the guide said, ‘Can you take that shot?’” Ball said. “The bear was about 300 yards out, and I couldn’t even see it. When I did, it was only briefly. Then the bear left.”

Moving more or less parallel with the animal, with the bear higher in elevation, Ball and Doxey abandoned their packs as they attempted to keep abreast of their quarry, which had no clue the two were present.

A few hundred yards later, the bear stepped into an opening, giving Ball a shot.

Off went the rifle’s safety as the scope’s cross hairs were settled behind the big animal’s shoulder.

“I hit him in the boiler room,” Ball said.

Still, the bear spun like a bull and lumbered downhill, toward the two men.

Ball connected with each volley, and a lifetime later, the bear, which would measure almost 8 feet by 8 feet, stumbled a last time, falling 20 yards from the hunters.

Everyone has different ambitions, and Ball had realized his.

“It was a lifelong dream come true,” he said.