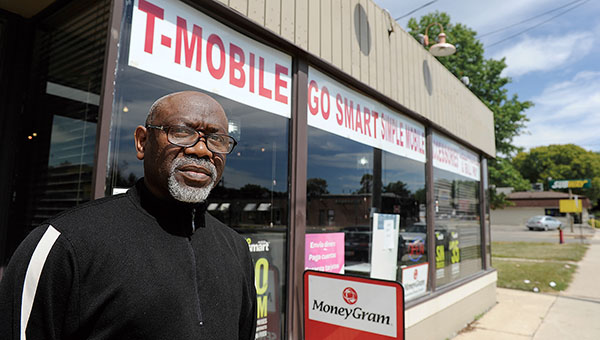 AUSTIN — Alioune Ndiaye knows not to bring scissors to a gunfight, but last Friday instincts got in the way.

Two men reportedly tried to rob Ndiaye’s mobile phone store, The Wireless Center, on West Oakland Avenue after 7 p.m. but ran away when Ndiaye struck back with a pair of scissors. Of course, police urge others to react less aggressively in such situations, to always cooperate with anyone wielding a weapon and try to be alert.

“Listen to what the person is saying,” said Austin Police Chief Brian Krueger. “We do not want to see someone injured, or even worse.”

Ndiaye realizes how lucky he is after the incident. The outcome could’ve been different.

“I’ve been lucky,” he said. “The response of law enforcement was quick, and I think they did everything professionally.”

Despite how quickly the whole process happened, Ndiaye said some blatant clues gave the suspects away, as they wore hoodies in hot weather, entered the store unusually close to each other and immediately split when inside.

“At the door, I realized something was wrong,” he said.

Ndiaye said one suspect cursed, pointed a gun and demanded money while the other watched the door.

“I was shocked … that somebody can enter my store and start cursing me,” he said. “I was waiting to see what they were going to do. I had no plan.”

Ndiaye sat tightly and wondered if he should grab the pair of nearby scissors while the suspect with the gun came around the service counter and very close to Ndiaye. When Ndiaye stood up, the man watching the door fled the scene, which momentarily distracted the gunman. Ndiaye lashed out with the scissors. He told police he may have hit the gunman’s left arm, and that suspect fled the store, as well. Had the gunman kept his distance, the whole outcome would’ve changed.

Ndiaye ran after the suspects, hoping to keep sight of them for police. However, he had to turn back, as his front door was still open.

Police spoke with several people in the area who saw the suspects running northbound on 10th Street. The suspects, two black men in their 20s, have not been arrested.

The whole scramble has pushed Ndiaye to take better precautions.

So that’s what Ndiaye is going to install, along with an electronic lock he can activate from his desk. There’s a first time for everything. Ndiaye doesn’t want to allow a second.