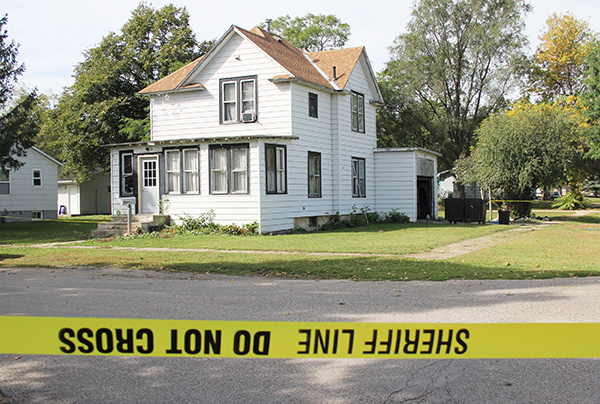 The Iowa Division of Criminal Investigation and the Worth County Sheriff’s Office are investigating the death of a man who reportedly beat and stabbed a woman at 208 Fourth St. N. Sunday night. — Sarah Stultz/Albert Lea Tribune

NORTHWOOD — One man is dead, and a woman is being treated for stab wounds after a reported assault Sunday night.

The man, identified as Michael Lee Zubrod, 39, of Charles City, Iowa, died while in custody, according to a report from the Iowa Division of Criminal Investigation. The woman, who witnesses have identified as Rhonda Schukei, 48, remained in serious condition Monday night.

Worth County Sheriff’s Office deputies received a report of a possible domestic assault at 208 Fourth St. N. in Northwood at 11:30 p.m.

When a deputy arrived at the house, he reportedly heard Schukei screaming for help, according to the report. When he entered the house he found Zubrod severely beating her. 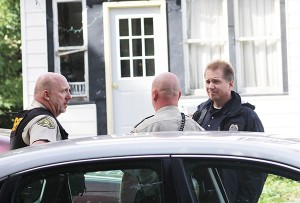 Additional deputies arrived and tried to subdue Zubrod, who went unresponsive after they put handcuffs on him. Efforts to revive him failed, and he was later pronounced dead, the report added.

Special Agent Mike Krapfl with the Division of Criminal Investigation declined to elaborate Monday evening on the measures taken to subdue Zubrod. He said there are more interviews that need to be completed before information could be released.

Initial indication is the man and woman were involved in a personal relationship.

Many questions remained Monday as officials could be seen going from door to door in the neighborhood.

Krapfl said an autopsy was conducted on Zubrod Monday at the Iowa State Medical Examiner’s Office in Ankeny, Iowa, and a full autopsy report and toxicology reports are pending. He anticipated those results in the next day or two.

Ken Ellingson, who lives two houses down at 204 Fourth St. N., said he woke up at about 11:45 p.m. Sunday to flashing lights. He saw two Worth County Sheriff’s Office squad cars and an ambulance. A second ambulance came later.

He said he did not know his neighbors well but is saddened that a small town such as Northwood — population 1,989 — has seen three alleged stabbings in the last four months.

On Aug. 5, Tyrone Washington Jr., 39, allegedly stabbed Justina Marie Smith, 30, to death in Swensrud Park. Washington pleaded not guilty and has a trial set for Oct. 30.

On June 5, Donald Monte Baker allegedly stabbed Bennie Montgomery, 28, and Valerie Merrideth, 26, both of Northwood, after an altercation at the Schoolside Apartments. Baker pleaded not guilty in July.

The stabbings are unrelated.