Funeral services for Eleanor T. Carlsgaard will be at 10:30 a.m. Monday at Bethlehem Lutheran Church, Myrtle. The Rev. Ron Myers will officiate. Visitation will be from 4 to 6 p.m. today at Bonnerup Funeral Service, Albert Lea, and again one hour prior to the service at the church. Interment will be at Greenwood Cemetery, Glenville, following the service. 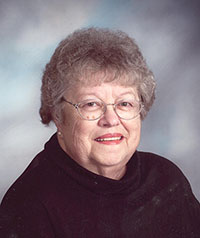 Eleanor was born on Feb. 26, 1938, to Raymond and Iva (Fogerty) Legried, in the town of Clarks Grove. She graduated high school from Albert Lea High School. After graduation, she was united in marriage to Arlen Carlsgaard on Sept. 8, 1956. To this union, two children were born. After marriage, the couple moved to Texas while Arlen was in the military. Soon after, they returned back to the Albert Lea area.

Eleanor was a long-time member of Bethlehem Lutheran Church. She worked various jobs including working at Land O’ Lakes, Mrs. Gerry’s and Good Samaritan Society, and worked as a daycare provider at the YMCA in Albert Lea.

Eleanor loved to spend her free time crafting. She also enjoyed cooking and baking. Her most important and cherished moments include the time she got to spend with her family. She was the most giving and caring person in the world.