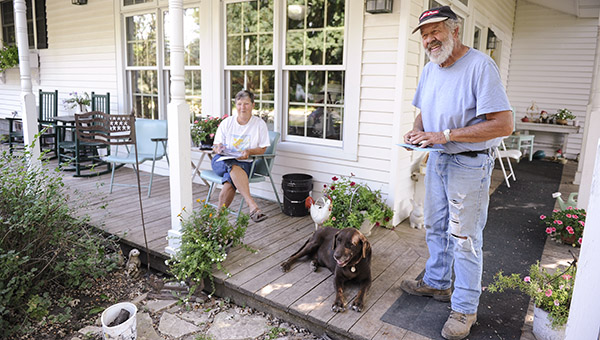 Farmer John Ulland and his wife Jan will be opening their farm to visitors for the 25th year in September. Farmer John’s Pumpkin Patch will open Saturday for the season. — Eric Johnson/Albert Lea Tribune

CORNING — It remains a kindergartner’s paradise, but adults also get caught up in its wonder. 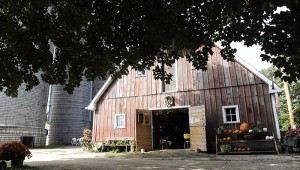 And for another fall, John and Jan Ulland will welcome the public to their quaint, little farm that harkens to a slower, more relaxing moment in time. Better yet, the Ullands are celebrating the 25th anniversary of Farmer John’s Pumpkin Patch, a quiet spread in northeast Freeborn County, seemingly tucked back in its own little world.

There are pumpkins, gourds, 15-foot-tall broom corn, endless flowers, trails and an old barn with plenty of games. Even two, mostly plain-looking silos offer a riot for children. 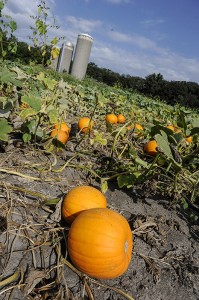 Inga, a friendly, old chocolate Labrador, meanders around the property and visits with the guests and kitties.

The Ullands moved to the property in 1963, but it was a homecoming for John, who grew up on at that farm. The couple unintentionally started Farmer John’s Pumpkin Patch in the late 1980s, as John planted pumpkins as a way to control weeds. Friend Dean Zellar then wanted to take his grandchildren to see the pumpkins, and the children coined the name “Farmer John.” The Ullands started selling pumpkins to area stores, mostly to get rid of them. The word was getting out, and people wanted to visit the farm.

Family and friends started visiting in 1988. The next fall, the public was visiting in numbers. The numbers continuously grew.

Over the years, the Ullands have tried to add to the experience. For the last 20 years, they’ve offered horse-drawn wagon rides on Sundays. They tore down the original barn and replaced it in 2003 with a safer one, but still rustic and made out of old, weathered boards.

“I think every year we’ve tried to add something,” Jan said.

Several years ago they began giving a free pumpkin to each family who had a baby born after Oct. 15. Thus far, they’ve given away hundreds.

This year, the Ullands have added wireless Internet and will launch their own website, as well.

In the meantime, John has been posting plenty of updates on Facebook. For this year’s anniversary, every week he has posted another picture or memory from each year the pumpkin patch has been in existence. Of course, many things have changed over the years, but the focus has always been the same.

“We’re not in the entertainment business,” Jan said. “We’re in the experience business.”

Jan means guests are free to roam. They can pick their own pumpkins and raspberries, and tour the property as they please. Yet the farm remains a good educational tool and fun experience every year for entire kindergarten classes to experience.

When Jan looks around the property, it’s hard to believe it has already been 25 years.

“It kind of turned into something you never expected,” Jan said. “It evolved, literally.”

The 25th anniversary of Farmer John’s Pumpkin Patch will kick off on Sept. 21, the first day the farm is open to the public for 2013. The Ullands keep the farm open from noon to 6 p.m. every day through Oct. 31.

• Free pumpkin for every baby born after Oct. 15 of current year

• Games and learning in the barn

• Fun in the silos