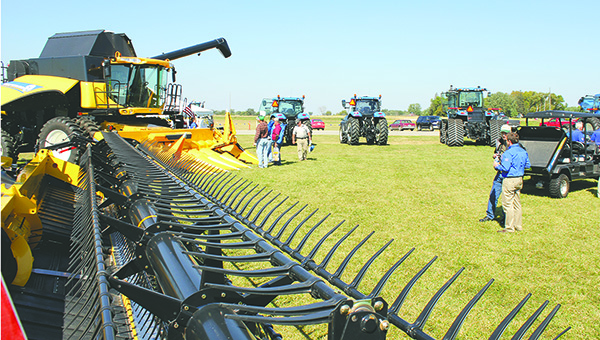 LYLE — Two companies with similar visions joined again in Lyle on Wednesday, along with droves of curious farmers and those who support the ethanol industry.

More than 20 representatives from across the U.S. on behalf of New Holland agricultural equipment company and about 175 farmers met at Absolute Energy’s ethanol plant to discuss the industry and check out the newest tractor technology. 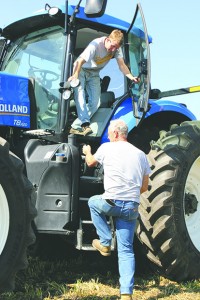 “New Holland is the only major manufacturer that is really putting their money where their mouth is in support of the renewable fuels industry,” said Absolute Energy President and CEO Rick Schwarck.

The visit was just one of about a dozen to Midwest ethanol plants by New Holland this year. The company is in its second year of partnering with ethanol advocate Growth Energy, and it was the second year in a row it stopped in Lyle.

This year, farmers watched ethanol industry presentations, visited with New Holland representatives and tested some of the newest tractor technology in a nearby field. Many of Wednesday’s guests already sell their corn to Absolute Energy. Some, like Pete Jahr of the St. Ansgar, Iowa, area, are entangled in all aspects of it.

“I sell 100 percent of my production to the ethanol plant, and I have three vehicles that use E85,” Jahr said. 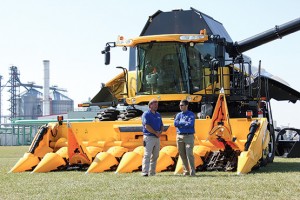 Better yet for New Holland, Jahr was unintentionally doing some of the work, as he had plenty of good things to say about the company’s equipment.

“We’ve been running New Holland since 2008,” Jahr said. “We have their full line of equipment.”

All of New Holland’s tractors run on biofuels, and Jahr said he is impressed with both the fuel economy and the minimal emissions. Because of a Tier 4 emissions regulations, Jahr and representatives say New Holland’s emissions are cleaner than the air they take in.

“You’ll never see that smoke,” Jahr said as he pointed to his tractor.

Other farmers, testing several new lines of equipment in the field, were weighing their options.

“My dad’s the Massey guy,” said Matt Johnson of Grand Meadow, who tested a New Holland T8 with his relative, Mark Thorson of Rock Dell. “I kind of like the New Hollands.”

Regardless of the brand of tractor, though, many local farmers have bought into Absolute Energy and sell corn to the company.

“We have one of the largest percentages of farmer ownership that I’m aware of,” Schwarck said.

Schwarck said 70 percent of Absolute Energy’s owners are farmers, and 95 percent of its owners live within a 50-mile radius of the plant.

With that amount of local support and shared views with companies like New Holland, Schwarck expects more field days in years to come.