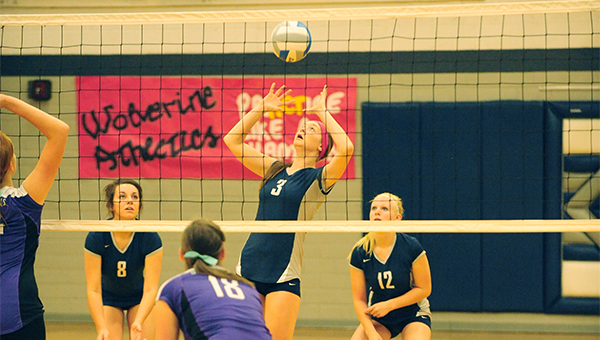 The Glenville-Emmons volleyball team was swept 3-0 at home Tuesday against Grand Meadow.

After falling in the first two games, the Wolverines hung tough with Grand Meadow in Game 3. After the score was knotted at eight, Grand Meadow went on a 9-3 run to take a 17-11 lead. However, the serving of Rieley Madson brought the Wolverines all the way back. Glenville-Emmons went on a 12-5 run to take its first lead of the game 23-22. However, the Superlarks prevailed 26-24 to win the match.

Glenville-Emmons head coach Lisa Ziebell said serving has been a strength for her team.

“I’ve been telling the girls to go for ace serves,” she said.

With five freshmen and three sophomores on the roster, the Wolverines were battling inexperience.

“It’s going to be a learning season,” Ziebell said. “Tonight, the girls improved with their communication.”

The Wolverines were led by Madi Ziebell with 17 digs and seven kills and Madson with 27 digs and five kills.

Glenville-Emmons has an overall record of 0-3.