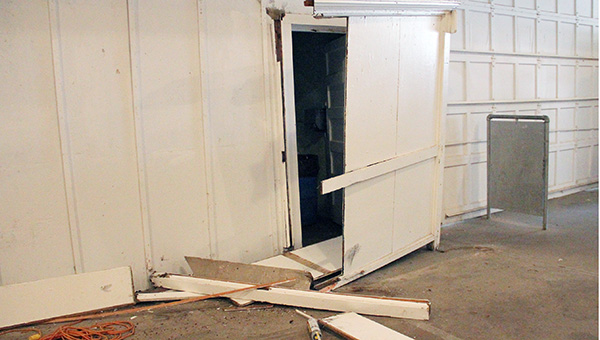 The partition to one of the bathrooms underneath the Grandstand at the Freeborn County Fairgrounds was damaged Saturday night after someone reportedly broke into the building and drove golf carts into walls. — Sarah Stultz/Albert Lea Tribune

The manager of the Freeborn County Fairgrounds and the organizer of the Big Island Rendezvous & Festival are asking the public for any information tied to a break-in of the Grandstand on Saturday night.

Rendezvous organizer Perry Vining found the building damaged at about 10 a.m. Sunday after he went to the Grandstand to retrieve his golf cart. Vining planned to start setting up for the Rendezvous, which is later this week. 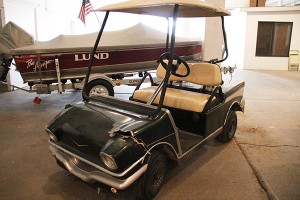 Vining said what he found was that his golf cart and Fairgrounds Manager Norm Fredin’s golf cart had been used to damage property underneath the Grandstand.

Vining’s cart had been given to him last year after he had a stroke in December 2011 so he could get around Bancroft Bay Park, the site of his event. Fredin’s cart was custom built to look like a classic car. He uses it to get around the fairgrounds.

Not only were the golf carts damaged, but a partition to the entrance of one of the bathrooms was knocked down, another partition that runs along the center of the Grandstand was partially knocked down and a few boat trailers stored there for the winter were also damaged.

“It was pretty devastating,” Vining said.

Though the damage could have been worse — a shiny yellow classic pickup and other boats were sitting nearby untouched — Fredin said he would like to offer a reward for information that would help police solve the crime. He did not know how much the reward would be.

“Why would anybody do it, ruin personal property?” he said.

He estimated more than $5,000 in damages. The building had been left unlocked.

Freeborn County Administrator John Kluever said he will forward information about the damages to the Minnesota County Insurance Trust.

Gates open at the Big Island Rendezvous at 9 a.m. Saturday and Sunday.