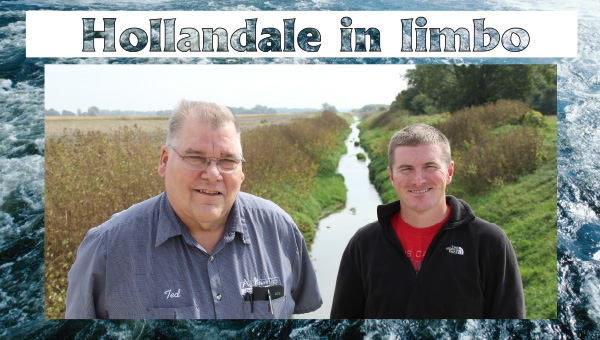 HOLLANDALE — If floodplain maps produced by the Federal Emergency Management Agency become official, the value of half of the homes and businesses in this community will deflate and owners will be required to purchase flood insurance.

The same goes for 44 homeowners in the rural area around Hollandale. Officials with the city and the Turtle Creek Watershed District believe FEMA’s maps are wrong — by as much as three feet. They would add about 11,800 acres to the designated floodplain of Turtle Creek.

“It would kill the town and the community around it in the country,” said Mayor Ted Radke. 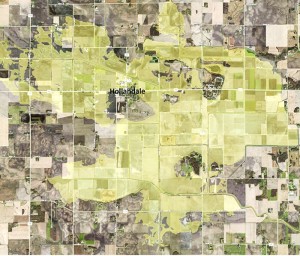 Turtle Creek Watershed District Administrator Justin Hanson said that in some parts of the country, three feet doesn’t mean much. But Turtle Creek runs through especially flat, productive farmland and three feet changes the floodplain by miles and miles.

Property owners in a floodplain with a mortgage must purchase insurance that costs between $1,200 to $5,000 a year, depending on real estate value. They cannot get building permits. City residents are connected to sewer systems and water lines, but in rural areas, property owners cannot dig wells and cannot install septic systems. Because of these restrictions and extra costs, property in designated floodplain usually has a lower property value.

The FEMA maps were issued in June 2011. A three-month appeal period started this May and ended Aug. 10 of this year.

Hanson noticed the difference in FEMA floodplain maps when compared to a recent engineering study of the Turtle Creek area the watershed district had commissioned. The district filed an appeal within the appeal window but needs $12,000 so the engineering firm can put a report together that reflects its models and submit it to FEMA.

FEMA gave the district until Oct. 7 to submit the additional information.

On Sept. 17, the Freeborn County commissioners voted 3-2 to support but not fund the engineering firm’s report. Since then, Radke has spoken with the three who voted against the proposal, saying there seems to have been a miscommunication. He and Hanson weren’t seeking full funding. They sought assistance.

Commissioner Glen Mathiason — who voted against it along with Christopher Shoff and Jim Nelson — said the board indeed was concerned about home values of residents but wanted to avoid setting a precedence of paying for any and all FEMA appeals.

The matter is back on the agenda for the county board meeting Tuesday, and all parties say they are intending a three-way split. The county, the city and the watershed district each would pay $4,000. Hanson and Radke said they would attend the meeting Tuesday.

Commissioners Dan Belshan and Mike Lee voted for it Sept. 17. The Hollandale area is in Belshan’s district.

“It’s a serious issue for a lot of people, and we need to step forward and protect their rights,” he said. “It could make certain acreages and houses worthless.”

FEMA creates flood maps for the purposes of emergency management and determining the need for insurance. A methodology is given to a contractor for making the maps.

Radke said he believes FEMA and its contractor goofed up and know it. However, instead of just changing the maps, the appeals process must be used.

Radke, 62, has been the mayor since 1988 and the worst flood he saw was in 2004, when 15 to 18 inches of rain fell on Sept. 16. Residents built a dike on Northern Avenue. The FEMA maps say the floodplain would go nearly to Minnesota Highway 251, the main east-west route through the center of Hollandale.

“There was no way the water would get even close to 251,” Radke said. “It got to Northern Avenue in the worst flood I’ve ever encountered.”

Hollandale already has a flood-mitigation project in motion. A berm and culvert along Northern Avenue are slated to be constructed before winter comes. Radke said work begins in October.

“We are doing a very pro-active approach to this. We just didn’t need this slapped on our lap,” he said. “People can’t afford flood insurance.”

Flood maps for Freeborn County are dated 1982. A spokeswoman at FEMA’s regional headquarters in Chicago said FEMA is updating maps because of changing weather patterns, erosion and development change floodplain boundaries. She didn’t address whether the agency’s Hollandale maps were incorrect.

Hanson said usually local entities lack the necessary mapping to appeal FEMA work but it just so happened that the Turtle Creek Watershed District had invested in modeling the Turtle Creek watershed. It has detailed information about water in the area.

He said FEMA didn’t exactly acknowledge to him its maps were three feet off but told him that agency works the best it can with limited information. However, that’s why there is an appeals process, and the burden of proof, he said, normally is on the property owners. In this case, the watershed district is acting on behalf of the property owners.

“When you start throwing out water elevations near Hollandale, a little bit goes a long ways,” Hanson said.