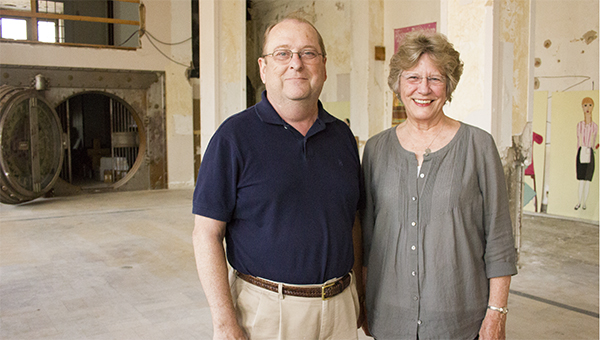 Paul Sparks and Bev Jackson Cotter are part of an Albert Lea Art Center committee that has proposed that the Art Center move into the first level of the Freeborn National Bank Building. Not pictured is committee member Marty Shephard. –Sarah Stultz/Albert Lea Tribune

An Albert Lea Art Center committee has proposed redeveloping the first level of the Freeborn National Bank Building and turning it into a new home for the nonprofit organization.

The Art Center’s leaders have been looking for a new building to move into for the last two years and have probably toured between 20 and 25 locations, both on and off Broadway, said Marty Shepard, chairwoman of the Art Center committee.

“This one caught our imagination, and we could see the possibilities for us there and how we could bring something to the city by bringing life to that corner,” Shepard said. “We’ve been dreaming about it for a long time and thinking of the possibilities.”

The building, at the corner of Broadway and William Street, is owned by the city.

The group envisions using the space not only for art displays, shows and classes, but also for cultural performances, receptions and other community events, Shepard said. The nonprofit has not determined whether it wants to buy or rent the space.

She said the renovation is estimated to cost between $400,000 and $500,000, which would be raised through a capital campaign.

“It’s been empty for 15 years and no one has come around with a possibility for that,” she said. “I think we’re a good alternative.”

Some question whether the nonprofit, which is tax-exempt, would make a good use of the space, as opposed to a commercial business such as a restaurant.

“If we occupy the first floor, there may be more people to get interested in the upper floors,” she said. “We could help in that.”

The Freeborn National Bank Building and the adjacent Jacobson Apartments were originally constructed in the 1920s but had been vacant since 1995 until the National Vitality Center opened an office at the back of the lower floor of the Jacobson building. Prairie Wind Coffee opened as a coffee shop in the front half of the lower floor last year and signed a three-year lease.

The remaining areas of the two buildings are vacant and have not been remodeled.

They were purchased by the city for $75,000 on April 19, 2001, out of concerns that they might be lost. City officials have hoped the buildings could be the key to revitalizing Albert Lea’s downtown business district.

In 2006 and 2007, the city invested almost $2 million for the exterior renovations of the bank building, at the corner of Broadway Avenue and William Street. Albert Lea City Manager Chad Adams stated in a previous interview with the Tribune that interior renovations are estimated to cost between $4 and $6 million, including replacing electrical, plumbing and HVAC systems and installing fire sprinklers, among other improvements.

Shepard said the Art Center would like to install public restrooms in the back of the building to lease back to the city and a small kitchen that could be used during catered events.

The Art Center is looking for a new home after what Shepard, herself, described as a “checkered past,” in their current building at 224 S. Broadway.

The building is owned by artist Susanne Crane.

The Art Center was established in 1959. When it was first established, the organization moved from place to place. From 1975 to 1986 it operated out of the small church at 501 W. Main St., now known as Something Special In the Nest.

In 1986 it purchased the building at 224 S. Broadway Ave. in downtown Albert Lea — known to many longtime Albert Leans as the Rivoli Theater.

Though the building was well-suited for the Art Center’s purposes, the operating expenses were higher than what was preferred. Because of this, the organization’s board was interested in selling the building to a third party in exchange for a long-term lease for minimal rent.

That third party ultimately was Crane.

After Crane purchased the building, the relationship between the two quickly began to deteriorate, and for several years the two parties were in the middle of court litigation over the building.

“We’d like to leave our past behind us and start fresh,” Shepard said.

Shepard said if the city approves a potential development agreement with the Art Center for the Freeborn Bank building, the group would ask for 15 months to raise the needed money to renovate the building. It would also apply for grant money to cover a large portion of the costs.

Albert Lea Mayor Vern Rasmussen said city officials have conducted focus groups in the last few months to determine what community members think should be done with the building.

He said the Albert Lea City Council is considering the Art Center’s proposal but at the same time is keeping in mind other alternatives.

“I really appreciate their energy for it,” Rasmussen said. “I think we all would like to see something positive there.”

On Tuesday, the city is hosting a community forum to generate ideas and gather input on potential uses for the buildings.

He said there are pros and cons to the Art Center proposal. While the Art Center doesn’t pay taxes, it could bring vitality to the downtown, which in turn could have a domino effect.

The hard part is that a developer for the top floors of the building would likely want the income from the lower floor, he said.

“The ultimate goal is getting that building filled up,” Rasmussen said.

What do you think should happen to the Freeborn National Bank Building?

Albert Lea officials are inviting the community to attend a forum Tuesday night to discuss the future of the Freeborn National Bank and Jacobson Apartment buildings.

The hope of the meeting is to generate ideas and gather input on potential uses for the structures.

There will be a tour of the buildings starting at 6 p.m., followed by a short presentation at 7 p.m., with discussion to follow. The presentation and discussion will be on the first floor of the Freeborn Bank building, 201 S. Broadway.