The memorial service for James W. Martin, 89, will be at 2 p.m. Tuesday at Central Freeborn Lutheran Church. The Rev. Matt Griggs will officiate. Friends may greet the family one hour prior to the service at the church. Online condolences are welcome at www.bayviewfuneral.com. 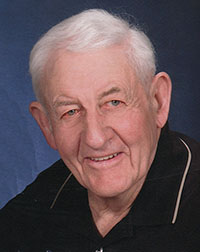 James W. Martin was born on July 17, 1924, in Staples, the son of Lawrence and Olga (Jensen) Martin. He grew up in rural Geneva, later moving to the farm in Bath Township where he lived for over 50 years. On Sept. 8, 1963, Jim was united in marriage to Diane L. Coon at Trinity Lutheran Church in Faribault. They farmed together until Jim’s retirement in 1995. Jim continued to help his son Joel on the farm until age 87. Jim was a member of Central Freeborn Lutheran Church. He was a volunteer for the Freeborn County Historical Society where, among other things, he drove the tractor for the school kids in the fall and at the fair. In his younger years Jim liked to roller skate, ice skate and square dance. Jim loved his farm and especially loved his Guernsey cows. Blessed be his memory.

Jim was preceded in death by his parents; his wife, Diane; sister, Catherine; and nephew, Alan Christensen.