Thriving through the air 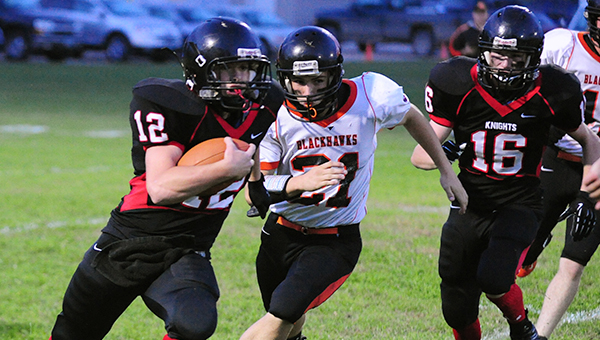 ALDEN — An opportunistic Alden-Conger football team put on a show for its alumni through the first three quarters Friday on Homecoming.

The Knights forced five turnovers, passed for 250 yards and trailed by eight points at the start of the fourth quarter. However, Madelia exploded with 22 unanswered points in the last 12 minutes of regulation to win 44-14. 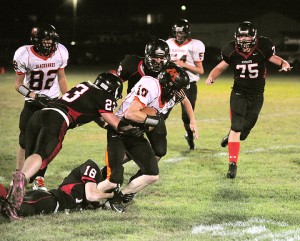 “We’ve been trying to pass a lot more lately, and that part of our game has come a long way,” said Alden-Conger head coach Bruce Smith.

On Alden-Conger’s first possession, the Knights drove into Madelia’s territory with a heavy dose of Matt Erickson and the run game. The drive stalled on fourth-and-short, and the Blackhawks cashed in with 16 straight points.

In the second quarter, Alden-Conger responded with offensive firepower of their own. Neel hit Eli Hallman in stride on a post route for a 44-yard touchdown. The Knights stopped Madelia on fourth down near midfield on the game’s ensuing possession and turned it into eight points with a 2-yard touchdown run by Neel on a quarterback keeper. 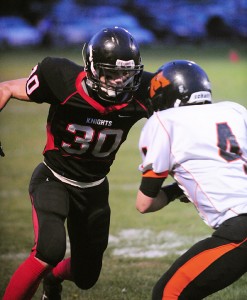 Colton Upsahl of Alden-Conger blocks in the flat on the right side of the field at the wide receiver position on a running play Friday against Madelia. The Knights trailed Madelia by one possession at the beginning of the fourth quarter. — Micah Bader/Albert Lea Tribune

To set up the Knights in the red zone, Neel bought time in the backfield by eluding defenders to move the chains on two straight third-and-long situations.

“If I get pressured, I just try to get loose and make the most of it,” Neel said. “Our receivers have improved a lot over the last few games.”

With the two-point conversion on another quarterback keeper by Neel, the Knights trailed 16-14. After an interception by Eli Hallman with 2 minutes and 45 seconds left in the half, Alden-Conger was poised to take the lead.

However, the Knights’ drive stalled, a snap sailed over the punter’s head on fourth down and Madelia took over in the red zone. The Blackhawks punched the ball across the goal line before the end of the half to take a 22-14 lead.

At halftime, Alden-Conger honored Erickson, the Homecoming king, and Karina Skov, a member of the volleyball team, as Homecoming queen.

The third quarter was an offensive disaster for both teams. Alden-Conger’s Bute picked off a pass and Hallman recovered a fumble. While playing as a defensive back, Madelia quarterback Kyle Schultz jumped an Alden-Conger receiver’s route and grabbed an interception. Despite all the action, no one scored.

After a botched special teams play at the end of the third quarter, Madelia took over at Alden-Conger’s 24-yard line. The Blackhawks scored on the first play of the fourth quarter to take a two-possession lead, and they never looked back.

“When you don’t win a lot of games, the heads go down pretty quickly,” Smith said. “With the numbers we’ve got and the kids we’ve got hurt, we tell them that all we ask is that they’re willing to play hard.”

“We’re going to stack the defense,” Erickson said. “They’re a run-heavy team, and I think we can stop the run. We’re better inside the box.”