St. Marys Hospital doctors are saying a Freeborn County man is lucky to be alive after he was infected with the West Nile virus earlier this summer.

The virus left Roger Burgess, 74, hospitalized for about a month and still struggling through speech, occupational and physical therapy. 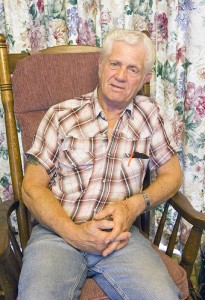 Roger Burgess, who lives south of Albert Lea, was infected with the West Nile virus in July. He spent a month at St. Marys Hospital in Rochester and is continuing rehabilitation locally. — Sarah Stultz/Albert Lea Tribune

“Everything you do is affected by it,” said Roger, who lives just outside the city limits south of Albert Lea. “Anything that has to do with walking, climbing, sitting or even squatting, it was all affected.”

Roger is one of 49 confirmed cases of the virus around the state this year.

He said his symptoms began July 20 when he started feeling like he was coming down with the flu.

On July 22, when he was out in his garage working he said he started to feel weak.

He was having trouble walking.

The next day it was worse. With a 102 temperature, he and his wife, Nancy, went into the emergency room at Mayo Clinic Health System in Albert Lea to seek help.

From 3 to 7 p.m. that day, doctors ran a series of tests with no luck.

Roger was then transported by ambulance to St. Marys Hospital in Rochester.

After two days of additional testing, including an MRI, doctors looked to perform a spinal tap for answers.

After that procedure they discovered Roger had a high white blood count, and they narrowed down the options to the West Nile virus. The virus had expanded into encephalitis, or swelling of the brain.

Ten percent of encephalitis cases are fatal, according to the Minnesota Department of Health.

Though it has been almost two months since he first came down with the flu-like symptoms, Roger still is weak from the waist down and has no feeling in his left leg. He is on medication for nerve pain and attends therapy three times a week at Health Reach in Albert Lea. He had to purchase new glasses because of changes in his vision.

“He’s come a long way from where he was,” Nancy said.

“Hopefully next year at this time, I’ll be a lot better,” Roger added.

As for where he might have been bit by the mosquito carrying the virus, Roger said he is still unsure but thinks it might have been in his backyard off of gravel 760th Avenue.

He said he was not having problems with mosquitoes at the time he got the virus; in fact, he didn’t even spray his yard for the pests as he has in years past.

He didn’t notice any bites on his body at the time the symptoms appeared.

Department of Health officials said the risk of contracting West Nile virus the remainder of the year has declined but people should contact their healthcare provider if they are concerned about symptoms.

According to the Department of Health, between 70 and 80 percent of people infected with the West Nile virus will have no symptoms, and one in five people have a relatively mild illness with a fever.

The virus was historically found in Africa and southern Europe and was first reported in North America during a 1999 outbreak of encephalitis in New York City.

It was first reported in Minnesota in 2002. Since, there have been 535 cases across the state.