Locomotion for little ones 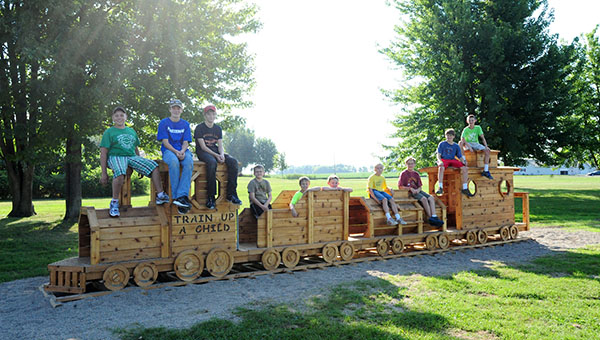 Some of the Cadets from the Hollandale Christian Reformed Church’s boys’ club sit on the train they built during school on Friday. The train was made possible by grant money from Freeborn-Mower Cooperative Services and other donations. The Cadets donated the train to the school as an addition to the playground. –Brandi Hagen/Albert Lea Tribune

HOLLANDALE — On a trip to Mason City last year, Elvin Steensma saw an idea for a project, and on Aug. 22 it was installed at Hollandale Christian School.

Steensma has been the head counselor of the boys’ club at Hollandale Christian Reformed Church for the last 40 years. The project he saw, a four-car wooden train, was one that seemed like the right fit for the Cadets program to build.

Steensma proposed the idea to the other counselors and the project took off. He said the Cadets have built other projects before so they could earn badges, but nothing has been this huge. And the train is the first project of value, he said, because it lasts.

To fund it, the Cadets received a $400 grant from Freeborn-Mower Cooperative Services and donations from individuals.

About 20 Cadets worked on the cedar wood train once a week from November until April — the length of the yearly program — with help from their counselors. 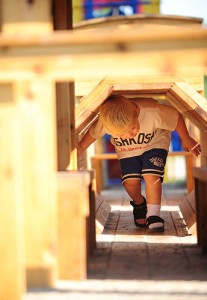 Connor Dowd Mincks, 3, plays on the train at Hollandale Christian School on Friday. Dowd Mincks’ grandma, Robin Mincks, heard about the train and took her grandson to see it and play on it. –Brandi Hagen/Albert Lea Tribune

Because the Cadets have their weekly meetings at the school, each night they would split into groups and go to different shops or garages to work on the train cars.

Throughout the building process, the counselors had what Steensma called “the front seat” while the Cadets followed a detailed plan to complete the project.

Steensma said the project was one that kept the boys’ interest, especially as the train began to take shape and they could see the progress.

On Aug. 22 the completed train was moved from inside the church to its home next to the playground at Hollandale Christian School.

Steensma said the Cadets donated the train to the school because it was their way of saying thanks for letting them hold meetings there.

School started on Aug. 26, and so far the train has been a big hit. During recess last week, children made beeline runs from the school to the train.

It was suggested to the Cadets that they should have put their name on the train. Steensma said the group didn’t because they built the train for others, not for their own recognition. 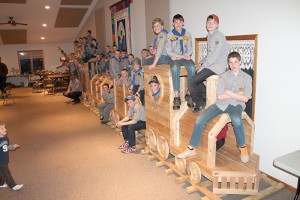 The group of Cadets who built the train that sits at Hollandale Christian School pose for a photo. —Submitted

There are about two counselors per grade. Once a counselor starts with a group of boys, he usually stays with them through all five years of the program.

Steensma said the counselors become a mentor to the boys and an adult figure they can rely on.

Throughout his 40 years with the club, Steensma said the best part has been watching young boys turn into Christian men.