That’s because the meat processing plant is building a primary care clinic for its employees and their families.

QPP administration got the idea for a clinic when looking at trimming health costs more than a year ago. 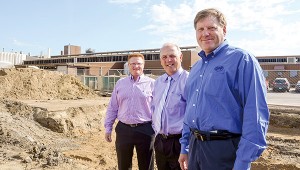 From left, Nate Jansen, Kelly Wadding and Dale Hicks of Quality Pork Processors Inc. stand in front of what will soon become a new clinic for QPP employees and their families. The primary care clinic will open in mid-October. –Trey Mewes/Albert Lea Tribune

“Our health care costs were skyrocketing, like every other company,” QPP President Kelly Wadding said.

The Austin-based company looked at several clinics offered by other meat processing plants around the country, though Wadding said there are a little more than a dozen companies who provide a clinic. After researching the idea, QPP officials decided to build a 1,200-square-foot facility south of QPP’s main building, next to the company parking lot.

The clinic, which QPP officials expect to start running in mid-October, will provide primary care appointments, prescriptions, referrals and help with long-term medical treatment, “all the things a primary clinic would normally do,” according to Wadding. The clinic will serve employees at first, though QPP officials say families of employee will likely be able to use the clinic within two months after it opens.

QPP officials say many plant workers use the emergency room as their main source of medical treatment instead of getting appointments at Mayo Clinic Health System in Albert Lea and Austin. By having an on-site clinic, employees can get immediate health care access and have medical staff available to help monitor ongoing problems, such as diabetes or an injury.

Medcor, an Illinois medical company with a history of providing health care to work sites, will run the clinic, which means the third-party company will be in charge of patient records and QPP won’t have confidentiality issues, according to Human Resources Manager Dale Wicks. QPP officials say the clinic will also mean more health initiatives at the company.