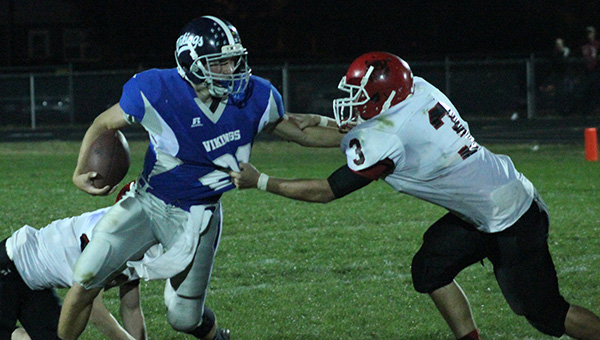 NORTHWOOD — Big plays early plus a consistent running game throughout equaled a big Homecoming win for the Northwood-Kensett football team.

The Vikings took down Riceville 43-14 on Friday night at home. 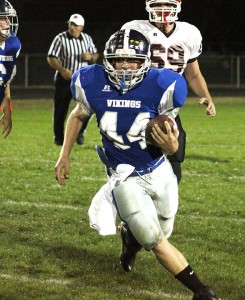 Northwood-Kensett fullback Coleby Bratrud rushes the ball Friday at home against Riceville. Bratrud carried the ball 18 times for 52 yards against the Wildcats. So far this season, Bratrud’s rushing total of 404 yards, is sixth in 8-Man District 3. He has also scored 8 rushing touchdowns. — Drew Claussen/Albert Lea Tribune

“We did pretty well on our special teams and obviously made some plays offensively,” head coach Dave Capitani said. “And the defense played pretty solid all night.”

Northwood-Kensett only completed three passes on the night, but all three resulted in touchdowns. Quarterback Joshua Einertson’s first two touchdowns went to Logan Nielsen and Brandon Brockman, who both had long runs after the catch. Einertson’s third touchdown came in the fourth quarter on a short pass to Mitchell Athey.

“The pass was there most of the time,” Capitani said. “They do a pretty good job of holding up your tight ends and not letting you get out, but we were able to get out to the outside a couple times.”

After building a lead through the air, the Vikings unleashed their ground game and defense.

Einertson broke a long touchdown run in the second quarter, and on Riceville’s next drive, the Vikings’ defense put some points on the board when defensive lineman Thomas Yezek fell on a fumble in the endzone.

“Running inside was really tough,” Capitani said. “We knew there’d be some things open, we had a couple big plays on the outside running the ball.”

Northwood-Kensett led 28-0 at halftime and made it 35-0 on another Einertson rushing touchdown in the third quarter. Einertson, who is listed as a running back on the roster, had 134 yards through the air and 127 on the ground with five total touchdowns.

Riceville bookended Northwood-Kensett’s fourth-quarter touchdown with two of its own, one through the air and one on the ground.

The Vikings defense created four turnovers and held Riceville to 184 yards of offense.

“We believe in our run defense,” Capitani said. “They were going to get some yards, but we didn’t want to give up the big play, which we didn’t.”