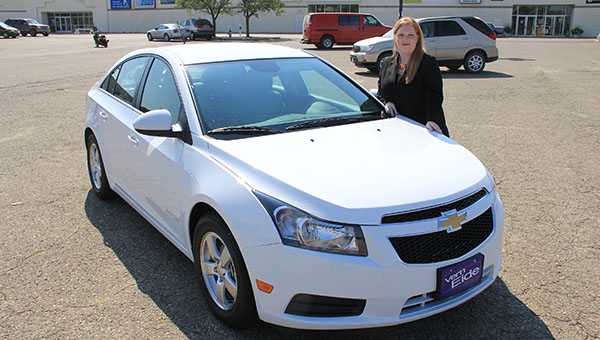 On Friday, Leah McKane stands next to a Chevy Cruze she earned for selling Mary Kay cosmetics and assembling a team of Mary Kay sellers. The car says “Mary Kay” on the door panels. –Tim Engstrom/Albert Lea Tribune 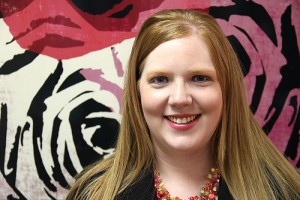 Leah McKane stands in front of a piece of art at Studio 13 in Skyline Plaza. The studio is a place where she meets with her Mary Kay team members and consults with customers.

Leah McKane was shy in high school, so she participated in speech to get over it. Today, she leads a Mary Kay team and has met enough requirements to earn a white Chevy Cruze with the nameplate of Mary Kay on the side.

She picked up the car Sept. 1.

“My self-esteem and personal growth has changed the most since I started Mary Kay,” she said. “Now I can come in here and just chat with everybody. I am very confident in myself.”

McKane runs a licensed day care center that is open 60 hours a week. She is the mother of two children, a 7-year-old boy named Nick and a 5-year-old girl named Tori. She has a husband, Adam, who works two jobs, one as a jailer at the Freeborn County Courthouse and another as a police officer in New Richland.

And she maintains an office and training center at Skyline Plaza that serves as a gathering space for her team and a meeting place for her customers.

How does she do it?

McKane, 27, grew up in Worthington and graduated from Worthington High School in 2004. Being shy, she never went out for sports, instead opting for Family, Career and Community Leaders of America, which some might know by its former name, the Future Homemakers of America. She was in Student Council, Girl Scouts and in church and community youth groups.

Her mother and grandmother used Mary Kay products, she said, and she used it as a girl. She didn’t wear much makeup in high school and wore some in college.

McKane attended Minnesota State University, Mankato. She earned a degree in child development with a certificate in nonprofit leadership.

By 2009, she found herself to be a divorced mother of two young children and running a day care in Mankato. She was spending a lot of time with tots and wanted interaction with adults.

Mary Kay seemed like a good way to do that.

She said she was attracted to Mary Kay’s priorities: 1. faith 2. family 3. career. She decided to be a seller and started wearing makeup more frequently.

McKane met her husband-to-be, Adam, in 2010. She and her day care moved to Albert Lea in 2011 and began building a Mary Kay customer base here, in addition to what she had in Mankato and Worthington. The couple got married in July 2012.

She now has about 350 customers. To get the car, she needed to have at least 14 team members and have sold at least $20,000. She blew past that threshold.

“She is the hardest worker I know,” said Adam.

He said the Mary Kay business is her passion. He said she does “a pretty amazing job” of making women feel better about themselves.

Adam said he is a sucker for redheads and likes her smile.

“I have a care-free attitude, and it’s always nice to have someone to smile along with me,” he said.

Last Tuesday, Leah McKane spent a few moments with a customer at her place at Skyline Plaza, then came out to see that someone keyed her new Chevy Cruze.

She was irritated in the moment but didn’t file a police report. She decided to not let the damage get to her. Mary Kay insures the car, and the paint will be repaired.

“Not everyone lives in a pink bubble,” she said. “Mary Kay has taught me the skills to not let those moments bother me.”

Every two years, she can qualify for another new car. However, Mary Kay is offering a black Ford Mustang as part of the 50th anniversary of the company, which is Sept. 13, 2013.

By the way, the lucky number of the founder, Mary Kay Ash, is 13, because of the date and the floor of the building she started on. Hence, McKane’s place at Skyline Plaza is called Studio 13.

McKane wants the Mustang. It even comes with pink lighting for the undercarriage, she said. She said there are production goals she must meet.

She has a diamond ring at home from another production goal she met. And the money she makes from Mary Kay serves as her family’s “fun money.” For example, she bought her husband a Harley-Davidson motorcycle with it.

Keeping all of her activities going requires organization, she said. Her office might be cluttered with piles of work, but she knows where everything is. However, she keeps the studio meeting area organized in a user-friendly way, and she keeps her calendar and documents organized in a way she can have them at her fingertips anywhere.

“My life is kind of an organized chaos,” McKane said.

She credited her husband and children for pulling their weight. The children know to play quietly and out of the way when a customer comes to visit. Her husband is licensed to handle the day care when she has to be away. And she has a Mary Kay team that can pinch hit for her should she be unable to be in two places at once.

“I have a fabulous support system behind me,” she said.

Her children don’t know they are going to Disney World in March, but it is their reward for doing their part. It is all paid for with Mary Kay income.

She tells her children and herself the same motto often: “short-term sacrifice, long-term gain.”

McKane hopes to be a national sales director by the age of 30. It would mean she would need to have 20 sales directors — what she is now — under her.

Studio 13 opened in July. It is not a store. It doesn’t sell Mary Kay products. It does have samples for testing, because Mary Kay operates on referrals, but McKane wanted a place to keep her Mary Kay work away from her home life and day care business.

“I needed that separation,” she said.

She brings her team together. The most she has had in the studio is 32 people. Usually, there are between 10 and 20 during gatherings, and they discuss success they’ve had and share strategies and new ideas.

“I love enriching women’s lives. I want to enrich the lives of customers and team members,” she said. “I am really more of a cheerleader and a mentor, not their boss.”

Interesting fact: She occasionally sells Mary Kay products to boys and men, such as recently selling an acne-fighting cream to six guys. She said Mary Kay has a line of skin care products for men.