No one else in sight 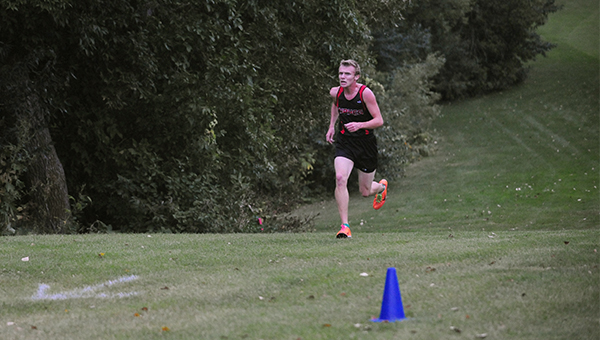 T.J. Schiltz of New Richland-Hartland-Ellendale-Geneva sprints up the last hill on Tuesday with no competitors in sight on the cross country course at Riverview Golf Course. Out of five meets this season, Schiltz has won four. — Micah Bader/Albert Lea Tribune

NEW RICHLAND — When T.J. Schiltz climbed the final hill Tuesday at Riverview Golf Course, no other cross country runners were in sight.

When he crossed the finish line, still nobody. The senior from New Richland-Hartland-Ellendale-Geneva blazed past the rest of the eight-team field to win his fourth meet of the season.

“I’ve been on varsity cross country for five years, and the closest I’ve come at this meet is second place,” Schiltz said. “I really wanted to win this one.”

Schiltz also ran away from the competition to win the Panthers’ preseason meet at Fairmont, and the first regular season meet at Stewartville. At Montgomery, he improved on last year’s third place finish by earning second. Then, he was the champion of the Maple River meet, and now he claimed the crown at the Panthers home meet.

Schiltz said his latest accomplishment was a relief.

“This was a stress that’s been hanging on my shoulders, but now that it’s out of the way, I don’t have to dwell on it anymore,” Schiltz said.

After the race, Schiltz shook hands with some of his opponents, runners he has come to know as friends.

“I like to see not only myself, but the other runners improve,” Schiltz said. “I know a lot of other teams put a lot of effort into it, and for me, it isn’t just about the competition.”

The rest of the Panthers helped the team to a third-place finish. Raece Johnson and Adam Anderson finished in the top 20, and Josh Fleming followed in 26th place.

“This is about as good as it gets,” he said. “It rarely happens that everyone runs well on the same day.” 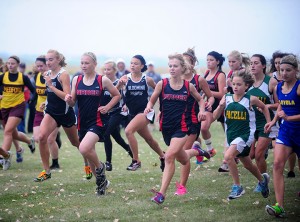 The NRHEG girls team, a group that bounced back from injuries, took eighth place.

“The girls might have been disappointed in our placing, but we’re moving in the right direction,” Weber said. “We haven’t been at full strength in three weeks, so it was nice to have everyone in the lineup.”

Katharine Lewer led the Panthers in 16th place, and Sandra Quezada followed 34 seconds behind to take 21st place. Missy Malakowsky broke the 20 minute mark, and Tina Quezada, Kristy Possin and Marissa Mortenson finished after the 22 minute mark within 34 seconds of each other.

Next, the Panthers boys’ and girls’ cross country teams will compete at Blooming Prairie at 4:30 p.m. Tuesday.