[Updated] Gallery: Improvement on the line 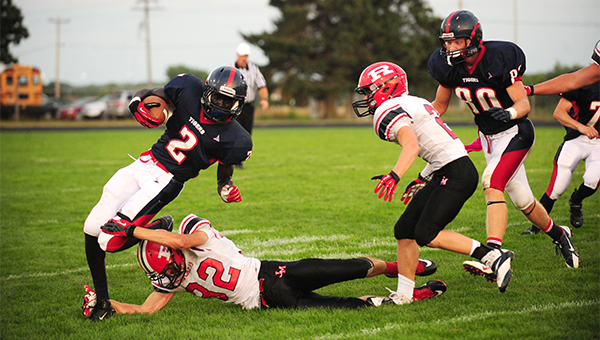 The Albert Lea offensive line propelled tailback Bany Chan to more than 100 yards rushing, an average of 6.5 yards per carry and a touchdown in the fourth quarter on Friday in the Tigers’ home opener.

“Matt improved a lot, and he was keeping his pad-level low,” Jeffrey said. “Scott started at guard for the first time in his life. He got to his spots and did his job.”

Before any points were scored in the first quarter, the Tigers took a blow to their lineup because of a shoulder injury to Dustin Mattson, a junior tackle.

“When Dustin went down, it made all of us wake up and know that we had to work hard for him,” Nemec said. “It was tough. They had some big linemen.”

Rochester John Marshall jumped to a 7-0 lead in the first quarter with a 43-yard touchdown run by Jason Rieke. On Albert Lea’s ensuing drive, the Tigers moved the chains twice but were forced to punt. The Rockets blocked the punt and started their next series just outside the red zone. Rochester John Marshall punched the ball across the goal line on the first play of the second quarter to extend its advantage to 14 points.

The Rockets threatened again in the third quarter but came up empty because of a fumble recovery by Albert Lea’s Dylan Johnson at the Tigers’ 9-yard line. After a Rochester John Marshall interception and a touchdown pass were wiped out because of penalties, the Rockets scored a 28-yard touchdown pass on third and 20.

At the half, Rochester John Marshall led 21-0.

On the first play from scrimmage in the second half, the Rockets recovered an Albert Lea fumble at the Tigers’ 17-yard line. The Albert Lea defense stepped up on the next play when Cody Scherff intercepted a pass and returned it 10 yards. Scherff is a two-time All-Conference tight end, but that snag was his only catch of the game. The next play was Albert Lea’s most explosive offensive play of the game: a 40-yard pass from senior quarterback Drew Cole to sophomore wideout Jakob Kilby. However, the drive stalled.

“We’d have a couple good plays, make a first down but then regress a bit,” Jeffrey said.

In the fourth quarter, the Tigers got on the board with a 6-yard scoring run up the middle and through two defenders by Chan.

Next, Albert Lea has the tall order of hosting Faribault at 7 p.m. Friday. The Falcons beat Austin 35-21 in their season opener and dismantled Mankato East 41-6.

“It’s our job as coaches to prepare the kids, and we’re going to go up there an compete as hard as we can,” Jeffrey said.

The Tigers are 0-2 after losing 64-14 at Mankato West in their season opener. 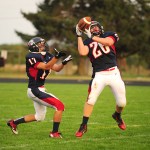 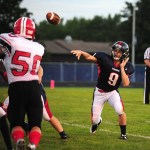 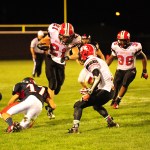 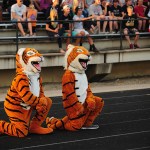 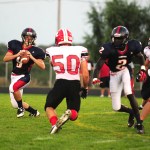 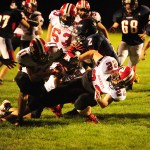 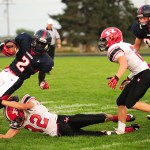