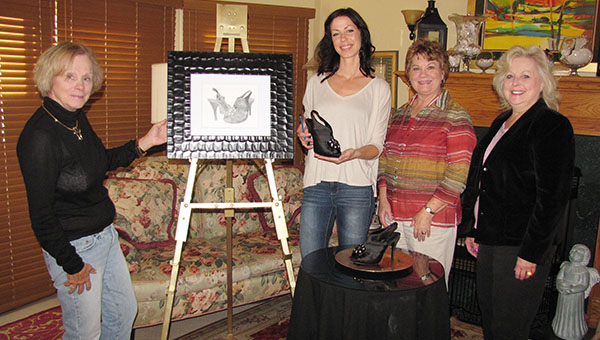 Joyce Nixon, left, stands next to a drawing of shoes created by Angie Hoffman, who is holding a shoe. Next to her is Rosalie Truax, and on the right is Barb Rognes. –Submitted

They are not just a pair of size 8 1/2 shoes that belonged to actress Marion Ross. To many, they are Hollywood glamour right here in Albert Lea. And they have been sold for $1,000.

“It was the excitement that for a while she made us feel special and more than just this Midwestern town that struggles,” said Rosalie Truax with Albert Lea Community Theatre.

Ross visited Albert Lea the second week of July, with the highlight being the July 10 opening of ACT’s performance of “Happy Days, a New Musical.” She came dressed up as the Hollywood star she is. 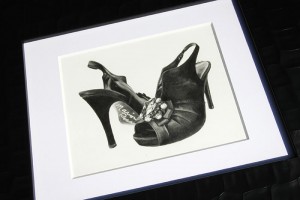 Joyce Nixon, a supporter of the Albert Lea Art Center, asked Truax whether she thought Ross might donate the shoes from that evening to the organization. Truax sent an email message to Ross, and a few days later a box arrived.

The women, along with artists Marty Shepard and Barb Butler, felt it would be a shame if the shoes ended up in the back of someone’s closet, so they approached George Ehrhardt, owner of the Albert Lea Seed House and longtime supporter of the arts.

He purchased the shoes for $1,000 and donated them to the Marion Ross Performing Arts Center. The plan is to put them on display in the lobby in memory of his wife, Anne, who died in October 2011. She had been active in theater as an actress, director and theater manager.

Three of her grandchildren appeared in the July performances of “Happy Days, a New Musical.”

For $20, people can enjoy wine tasting and hors d’oevres while they bid on a silent auction and a public auction, along with viewing art on display and for sale.

The fundraiser is from 5 to 7:30 p.m. at Wedgewood Cove Golf Club. Truax said it is part of an effort to find a new home for the Art Center. The event is open to the public.

The week Ross was in Albert Lea, in addition to the opening night, she attended lunches, parties, a museum ribbon cutting, a ride on the Pelican Breeze, a dinner at Crescendo and other engagements. 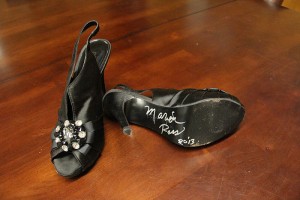 This pair of shoes belonged to Marion Ross and will be on display tonight at Wedgewood Cove Golf Club at a fundraiser for the Albert Lea Art Center.

Truax said at the end of the week Ross said to her: “You know, you have a wonderful life here in Albert Lea. I’ve lived in my house for a number of years, and I don’t know any of my neighbors. That’s how it is in California.”

The Hollywood star told Truax that she doesn’t go downtown for meals, the opera or theater because of long lines and terrible traffic.

“You have all the friends you could want,” Ross told Truax.

“I said that’s true,” Truax said. “Several times a month, there is something going on. We don’t really lack for culture and things to do in this town.”

Truax praised Ross for being genuine and sincere.

OK, as for fans of shoes, this pair of high heels is extra special.

“They are very glamorous. They aren’t just movie star shoes; they are symbolic of Hollywood glamour,” she said.