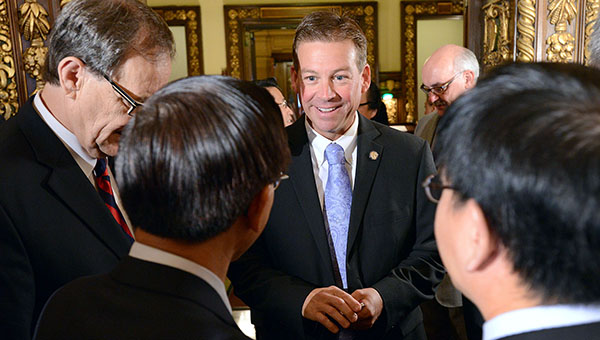 Sen. Dan Sparks, DFL-Austin, on Friday talks with representatives of the Taiwan Agricultural Trade Goodwill Mission. The group formalized a letter of intent to purchase $3.5 billion in U.S.-grown soybeans and corn over the next two years. — Submitted

State Sen. Dan Sparks, DFL-Austin, and other state leaders are looking for positive things to come out of a new partnership with Taiwan.

During a visit to Minnesota Friday, a Taiwanese agriculture delegation formalized a letter of intent to purchase $3.5 billion in U.S.-grown soybeans and corn during the next two years. Gov. Mark Dayton, Sparks and other state leaders hosted the officials at the Capitol. 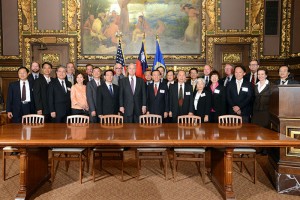 “I am happy to see them here signing this intent to purchase from Minnesota,” Sparks said in a press release. “It will have a big local impact in southern Minnesota and the entire state.”

It’s not yet clear what share Minnesota farmers will fulfill in 2014 and 2015, but an official said the state’s crops have typically exceeded 10 percent of the volume in prior arrangements with Taiwan.

Sparks, who chairs the Jobs, Agriculture and Rural Development Committee, applauded Dayton for his efforts to strengthen the relationship between the Minnesota and Taiwan agriculture industries.

“This was a great opportunity to meet with folks that live halfway around the world, but have a huge impact on our agriculture business here in Minnesota,” Sparks said in a press release.

Minnesota has entered into agriculture export deals with Taiwan in the past, but they say the new letter will deepen the state’s tie to its sixth-largest export market. Taiwan is an east Asian nation of about 23 million people.

“Taiwan is a small island, but we import a tremendous amount of agriculture products,” said Wen-Deh Chen, the vice minister of the Taiwan Council of Agriculture. The new plan calls for the purchase of 197 million bushels of U.S. corn, 500,000 metric tons of dried grains and up to 99 million bushels of soybeans.

Paul Simonsen, a farmer in southern Minnesota and chairman of the Minnesota Soybean Research and Promotion Council, said having the delegation in Minnesota would pay dividends.

“We believe that cultivating relationships is just as important as cultivating crops,” he said.

The Taiwanese delegation planned to remain in the state over the weekend for a tour that includes trips to farms.