Progress in the 2nd half 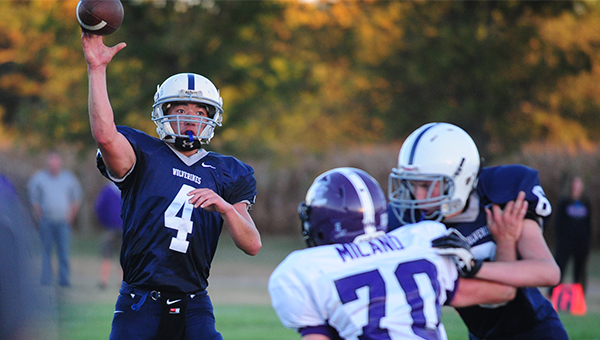 The Glenville-Emmons football team outscored Grand Meadow in the fourth quarter, but the damage was done by halftime. 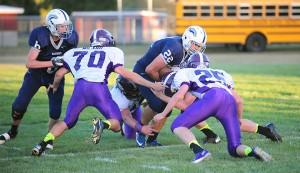 Marshal Hall of Glenville-Emmons runs the ball up the middle Friday against Grand Meadow. Hall rushed for 58 yards on 17 carries. He also caught one pass. — Micah Bader/Albert Lea Tribune

“At halftime I told the guys, ‘Don’t worry about the score. Do some good things, and we’ll build on it for next week,’” first-year head coach Jared Matson said.

The Wolverines did just that. Quarterback Christian Voss plowed his way into the end zone on a 6-yard run to give Glenville-Emmons its first points of the game as the clock wound down in the third quarter.

In the fourth quarter, Voss struck paydirt again. This time, he scored with a pass to Gavin Allison on a flag route. The touchdown was set up by a 31-yard run by Carter Dahlum, who broke contain on the left side of the Superlark defense. 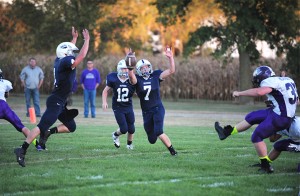 The Wolverines defense stepped up in the second half against Grand Meadow’s reserves. The Superlarks were held to six points in the third quarter, and Glenville-Emmons’ defense held Grand Meadow scoreless in the fourth.

“There are positive things to take away from this game both offensively and defensively,” Matson said. “I’m proud of the guys.”

“It’s a lot of fun to watch the kids play ball,” Olson said.

As a token of appreciation, Olson was presented with a football signed by the team. 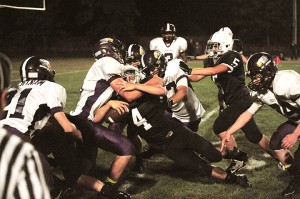 Christian Voss of Glenville-Emmons plows through a host of Grand Meadow defenders Friday to find the end zone in the third quarter on a 6-yard run. — Micah Bader/Albert Lea Tribune

During his 33 years as athletic director, Olson said he saw his two sons play for the Wolverines, as well as his grandson, Derek. After graduating last year, Derek is continuing his career on the gridiron at Upper Iowa University in Fayette.

Olson was also the head football and softball coach at Glenville-Emmons for 12 years. He said he found the most success on the softball diamond. While he was at the helm, his team posted a record of 141-39.

Unfortunately, Olson had a fever and wasn’t able to watch the entire game.

Grand Meadow was the first of two ranked opponents Glenville-Emmons will play this year. On Sept. 27, the Wolverines will play at No. 8 Spring Grove.

Glenville-Emmons has an 0-3 record. The Wolverines lost their season opener at Le Roy-Ostrander 46-6 and their second game of the season at Lyle/Pacelli 56-34.