Owatonna sprints past A.L. in 2nd half 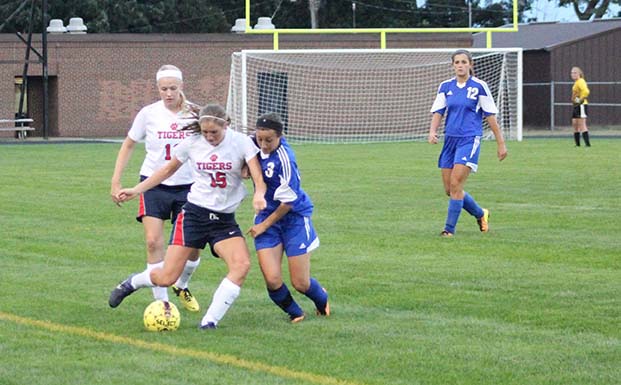 It was a story of two halves on Tuesday night for the Albert Lea girls’ soccer team.

The Tigers trailed Owatonna by a one-goal margin at halftime, but the Huskies tacked on five more goals in the game’s second 40 minutes to nab a 6-0 victory.

Owatonna got on the board in the first half when a free kick off the foot of Rachel Smith deflected off of an Albert Lea defender and found its way to the back of the net.

“I thought we played well,” Albert Lea head coach Rick Barnhill said of the Tigers’ first half. “We passed the ball well, we kind of brought the attack and played in a very courageous manner in the first 40 minutes, and we felt good about ourselves at halftime.”

Things got away from Albert Lea in the second half when the Huskies scored less than one minute after the opening kick. Sydney Kasper scored on a breakaway to make it 3-0, and Owatonna didn’t look back.

“Obviously they found another gear, another level,” Barnhill said. “They probably had a meeting at halftime over there, thinking that they’re only up 1-0 on us, that wasn’t too satisfying for them.”

The Tigers didn’t give up many shots — 11 in the second half — but Barnhill said five of those shots going in wasn’t acceptable.

“That’s close to 50 percent, that’s way too high,” Barnhill said, adding that on a good night the shooting percentage should be between 10 to 15 percent.

Barnhill also said the team’s anticipation and recognition speed against elite teams “is not as fast as it needs to be over 80 minutes,” but he said he couldn’t really ask any more from his team.

The silver lining was that Albert Lea was able to empty its bench and provide reserves with valuable playing time and experience for when they may be needed in a closer game down to road.

Albert Lea will look to right the ship against Faribault at 7 p.m. Thursday.