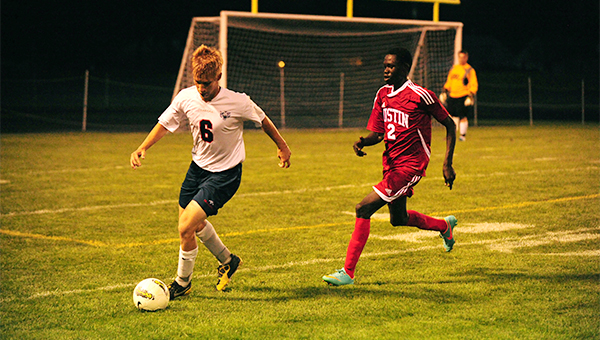 The Tigers were running out of time.

After a scoreless first half, the Albert Lea boys’ soccer team trailed Austin 1-0 on Thursday with less than eight minutes left in regulation. They’d already gone 52 minutes without scoring. 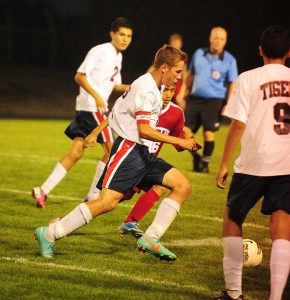 Hunter Tuveson of Albert Lea dribbles the ball up the field Thursday against Austin. The Tigers were able to force overtime with a score late in the first half, but Austin won 3-1. — Micah Bader/Albert Lea Tribune

“Our midfielders started with some combination passing, and we were able to find Tim,” Albert Lea head coach Joe Squires said. “He beat the outside defender, but he was drug down inside the box.”

Furland was given a penalty kick, and he tied the game. The defenses on both sides held for the remainder of the second half to force overtime.

Overtime during the regular season consists of two five-minute halves.

Austin pulled away with one goal in each overtime half to win 3-1.

In the first half, Albert Lea shut out Austin by limiting the Packers’ shots on goal.

“I definitely saw Nate (Hogstad) being more willing to go out and get the ball inside the box,” Squires said.

The Tigers fall to 1-3 on the season with the loss.

“There’s a reason we’re facing this adversity,” Squires said. “It feels terrible at the moment, but we need to learn from it. When we do overcome it, we’ll be a stronger team because of it.”

The two-goal loss is the closest the Tigers have come to beating the Packers since a 1-0 loss three years ago.

Next, Albert Lea will host Pine Island at 5 p.m. Saturday. Pine Island 1-4 overall and is coming off a 5-1 win Thursday at Lake City.