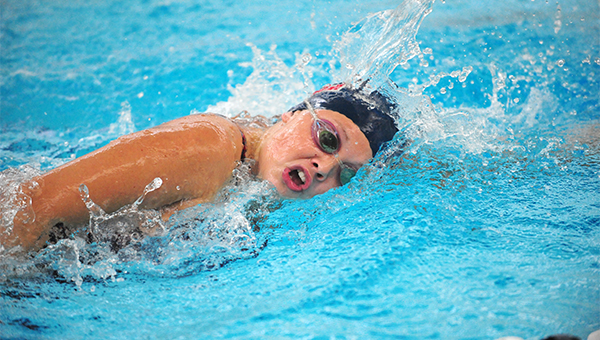 Mady Dahl of Albert Lea swims Thursday in the the 500-yard freestyle in a dual against Rochester John Marshall. Dahl took fifth place in the event. — Micah Bader/Albert Lea Tribune

The Albert Lea girls’ swimming team had a chance to knock off the Big Nine Conference champs on Thursday. 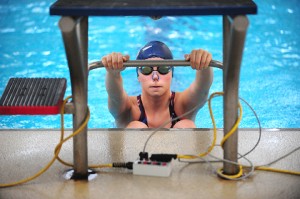 “J.M. — they don’t like to lose,” he said. “We had a lot of personal best times with a lot of great efforts, and that’s why we have these meets.”

As the final event of the evening started — the 400-yard freestyle relay — both teams had a shot at winning. The Rockets clung to a 90-82 lead. In the event, first place is eight points, second place is four points and third is two.

“We were shooting for first and second in the last event,” Schmitz said.

The Tigers took second and third, and the Rockets won the event to prevail 98-88.

Despite the first dual loss, Schmitz said he was pleased with his team’s performance, which included six first-place finishes out of 12 events. 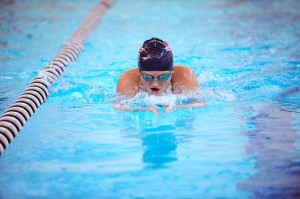 Albert Lea won the 200-yard medley relay and the 200-yard freestyle relay. Bailey Sandon won the 100-yard backstroke, Chelsey Battle won the 1-meter diving event and Lindsey Horejsi took first place in the 200-meter individual IM and the 100-yard butterfly. Horejsi is the fastest high school swimmer in the U.S. in the 100-meter breaststroke, but she decided to help the Tigers by competing in other events.

“I was open to anything so we could win the meet,” Horejsi said. “I don’t really mind swimming odd events if it helps the team.”

The Tigers took their biggest lead of the night when Chelsey Battle scored 147.65 to win the 1-meter diving event.

“Chelsey getting first in diving was huge for us,” Schmitz said. “That could have set us up to win the meet.”

Rasmussen said she knew it would be close.

“It’s hard to tell, but you get that feeling when you see your coaches really cheering you on to go,” she said. “I knew I had to kick at the last second.”

Next, Albert Lea will host Rochester Mayo at 6 p.m. Tuesday.