The Albert Lea girls’ soccer team dominated time of possession and shots on goal on Thursday in a 3-1 win over Austin.

The Tigers out-shot the Packers 31-9, and Albert Lea possessed the ball for 53 minutes, compared to 27 for Austin. 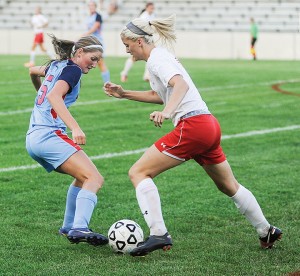 Albert Lea’s Hannah Savelkoul steps up on Austin’s Hannah Voogd during the first half Thursday night in Austin. The Tigers won 3-1 and outshot the Packers 31-9. — Eric Johnson/Albert Lea Tribune

“We attacked consistently all night and had them under pressure constantly,” Albert Lea head coach Rick Barnhill said.

However, at halftime the score was tied at one.

“Megan hit a classic upper-90 bullet that gave their goalkeeper no chance, and Becca Dup showed some plain and simple intensity,” Barnhill said. “Mackenzie came on as a reserve allowed us some breathing room.”

The Tigers improved to 3-1 overall on the season and have out-scored their opponents 24-3.

Next, Albert Lea will play host Byron at 7 p.m. Saturday.