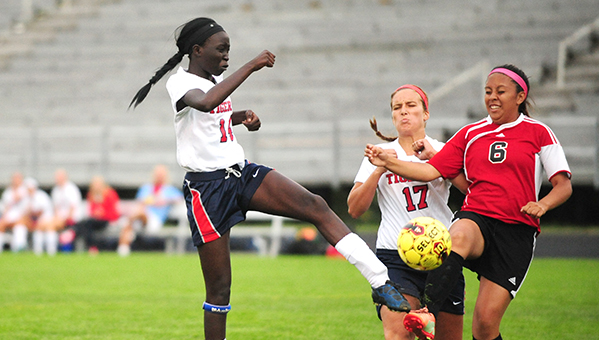 Becca Dup, left, of Albert Lea gets to the ball first Tuesday as a Worthington defender applies pressure. Dup was one of five Tigers to score two goals. Holly Wichmann, center, was also in on the play. Albert Lea defeated Worthington 14-0. — Micah Bader/Albert Lea Tribune

Albert Lea’s first goal was scored less than four minutes into the game. It was a small sign of things to come.

In the Tigers’ home opener on Tuesday, they cruised past Worthington 14-0.

“We basically rotated our reserves and starters every six minutes,” Albert Lea head coach Rick Barnhill said. “We weren’t trying to show them up. All you can do is keep playing.”

Not only did the reserves play, they contributed five goals.

“Our reserves kept the tempo and rhythm, and didn’t miss a beat,” Barnhill said.

Holly Wichmann started the scoring onslaught, and she also scored the first goal of the second half.

Wichmann moved from playing a defenseman to playing forward, and Megan Kortan, who also scored in the first ten minutes of the game, was also moved up the field to help the Tigers’ offense.

“We shuffled some players around, and this team really feels like they can score,” Barnhill said. “They’ve got a real flow to the way they play.”

Another player who was brought up the field this season was midfielder Sara Savelkoul. Barnhill said Savelkoul and Kortan have a galvanizing effect on the Tigers’ offense. Both players work hard to keep the ball on the offensive side of the field, and they distribute the ball to their teammates.

“They really put the girls in our front-line positions in position to make a touch and shoot,” Barnhill said.

“She could’ve gone forward in an attacking role, but when the score got high, she stayed back and gave other players a chance to get into the mix,” he said. “She’s very unselfish.”

Albert Lea varsity is 2-1 overall after playing two games on Saturday to start the season. The Tigers won their season opener 7-1 at Red Wing with a noon start, and Albert Lea lost 1-0 at Bloomington Kennedy in a game that began at 5 p.m.

“I’m certainly encouraged by our start to the year,” Barnhill said. “We’ve had plenty of opportunities, and we’re starting to get more and more confidence.”

Next, Albert Lea plays at Austin at 7 p.m. Thursday. Austin is 1-1. The Packers beat Fairmont 2-0 in their season opener and are coming off Saturday’s 4-0 win over Worthington. 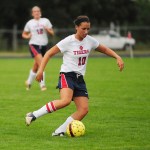 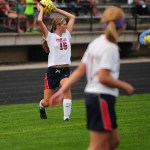 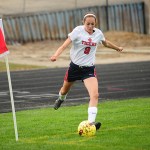 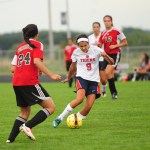