The aluminum chicken in front of the Hotdog House was knocked over either Friday night or Saturday morning and is headed for the recycling bin.

The vandals broke the chicken’s left leg and left the big bird horizontally on the ground. 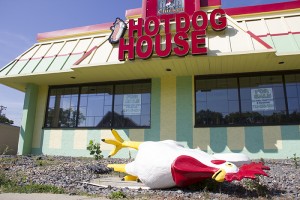 The chicken that normally stands in front of the Hotdog House on Broadway lies on the ground Saturday afternoon with a broken left leg. — Tim Engstrom/Albert Lea Tribune

The Hotdog House, 910 S. Broadway, closed at the end of July, and Wheat, a Sioux City, Iowa, resident who had planned to move to Albert Lea, has no plans to reopen it. The building is a former Kentucky Fried Chicken and is for sale. Wheat said he has two interested parties.

Vandals broke glass there in September 2012, near its opening day, and at a half dozen South Broadway establishments. Wheat said the glass cost $3,000 to replace.

He said he is disappointed with the neighborhood’s lack of support for its commerce. The same sort of property damage isn’t happening at other business areas in Albert Lea, such as Bridge Avenue or East Main Street.

“A lot of vandalism happens at that site,” Wheat said, referring to South Broadway.

Wheat plans to recycle the the 250 pounds of aluminum the chicken is made of.

“It is sad to see the chicken go since a lot of people had their picture taken standing next to Foghorn Leghorn,” Wheat said.