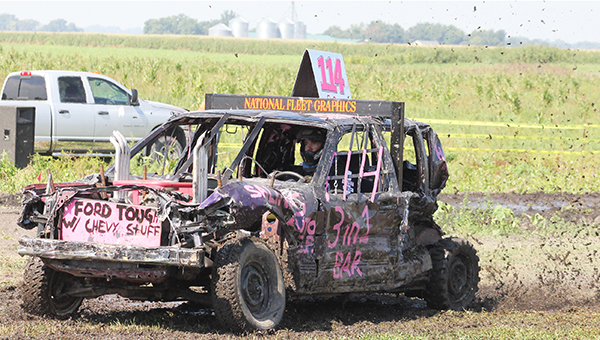 A driver revs up his car during car football Saturday in Hollandale. — Drew Claussen/Albert Lea Tribune

HOLLANDALE — The National Football League kicked off its regular season schedule this weekend, but four demolition derby drivers put a different spin on football during the Hollandale Harvest Festival on Saturday.

Car football, a competition where drivers in teams of two attempt to push a large tractor tire past a goal line, made its seventh straight appearance at the annual festival on Saturday. The event took place behind Mr. Machinery and was followed by a four-wheel drive mud bog.

Event organizer Kevin Uthke said the idea for car football came from an event that was covered by ESPN, and that usually around eight drivers participate. This year’s car football only had four competitors.

“I thought it was a really good time,” driver Troy Anderson of Geneva said, adding that he would like to see the event be advertised more so more drivers participate in it. “But other than that it was a blast.”

This year was Anderson’s second time participating in car football, and it was the first go-around for his teammate Wade Johnson. The two said they didn’t have any game plan going into the event. 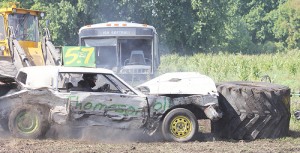 A driver pushes a tractor tire at car football on Saturday in Hollandale.

“It looked fun so we threw some stuff together to come out and play, kill some time and finish off some cars,” Johnson said.

Each team scored a touchdown before equipment failures forced the competition to be called after about 15 minutes. Despite the short time, the crowd of more than 100 seemed to be entertained by what they were watching.

“They definitely needed some team work to get from one side to the other,” spectator Enno Haan of Clarks Grove said. “One guy blocked the car and the other guy pushed the tire across, I thought that was pretty cool.”