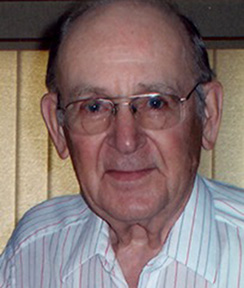 Wally entered the United States Army in July of 1942 and was discharged in December of 1945. During this time, he traveled to the South Pacific. He was stationed at New Caledonia, New Hebrides Islands, the Philippine Islands and Kobe, Japan.

On June 22, 1946, he married his lifelong friend and wife of 62 years, Florence Halvorson, in Bath Township. Together, they owned and operated Wally’s Mobil Station in Geneva from 1947 to 1959. The station was a gathering place for many. After 27 years of service, Wally retired from Streater Store Fixtures in Albert Lea. Wally and Florence moved to Owatonna in 1988 to be closer to their daughters.

Wally loved his time with his family. He enjoyed fishing, gardening and was an avid fan of the Minnesota Vikings and Minnesota Twins.

The funeral service for Wally will be at 11 a.m. Oct. 10 at Trinity Lutheran Church, 609 S. Lincoln Ave., Owatonna, with the Rev. Julie Malone officiating. Visitation will be held one hour prior to the service at the church. Interment will be at the Geneva Cemetery. Honors will be provided by the Steele County military funeral unit. Michaelson Funeral Home is handling arrangements.

In lieu of flowers, memorials are preferred to the Parkinson’s Foundation, Healthy Seniors of Steele County and Trinity Lutheran Church of Owatonna.