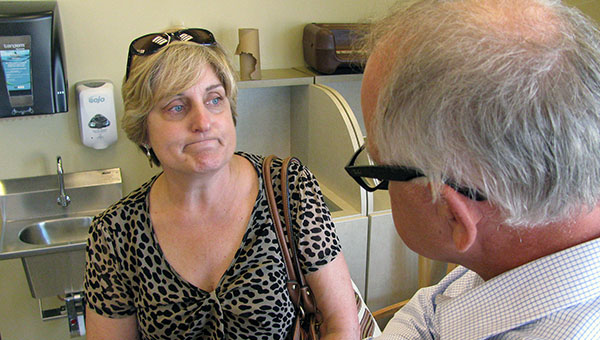 Sue Raasch, 58, came from Kasota to the St. Peter Coop to talk to Rep. Tim Walz about whether Congress should support military action against Syria. –Mark Zdechlik/MPR

ST. PETER — When dozens of people in southern Minnesota had a chance to tell U.S. Rep. Tim Walz whether Congress should support military action against Syria for allegedly using chemical weapons on its own people, they

Walz, a Democrat who represents Minnesota’s 1st District, met with more than 100 constituents one-on-one at the St. Peter Food Coop.

Like most who took the opportunity to speak to their congressman, Roger Parras, of St. Peter, took time off from work to tell Walz he doesn’t want Congress to approve a U.S. attack on Syria. President Obama has sought congressional authorization for limited strikes against Syria, contending that the use of chemical weapons by Syrian President Bashar Assad’s government must not stand.

“I want them to vote no to any military involvement at all in this situation,” Parras said. “There’s other things they can do. There’s sanctions. I don’t even want a no-fly zone. We shouldn’t be spending money on a civil war that we don’t even know who is on which side.”

Kent Wilson Jones of Lake Crystal told Walz that a “limited action” against Syria would become much more if any members of the U.S. military are killed.

“This is just a precursor to another war,” said Jones, 66. “The wrong people are running America.” 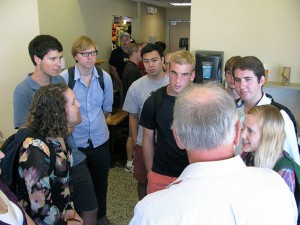 Rep. Tim Walz talks to students about his stance on military action against Syria at the St. Peter Coop on Friday.

Some of the people in line said given public sentiment against striking Syria, Walz would run into trouble with voters next year if he votes to approve a military strike.

Tyler Davis, a 25-year-old Afghanistan war veteran from Owatonna, waited more than an hour to share his thoughts with Walz.

Walz noted that this marks the first time that many in Congress will have an opportunity to vote on whether to authorize an act of war power, and asked Davis if he’d say no to the president’s request.

“Thanks for your service, too,” Walz replied. “It matters to have somebody who’s been there.”

After meeting with constituents, Walz said he had never held an event where there was unanimous consensus on an issue.

Walz said he will continue to gather information about possible military action and wait to see the exact wording of the resolution he will have to vote on before he decides how to vote.

“I am certainly incredibly skeptical,” Walz said. “Today certainly strengthened my belief that the public is wise; they are thoughtful. They’ve learned their lesson over the last decade about questioning evidence for war and making that bar very high. And that was articulated to me time and time and time again right down the line.”

Walz said he has not decided how he’ll vote on the resolution for military action against Syria that White House is seeking. Votes in the House and Senate could come next week.

Walz said if Congress rejects the administration’s push for air strikes he does not think the president has authority under the War Powers Act to order an attack on Syria.

Minnesota Public Radio News can be found online at www.minnesotapublicradionews.org.