What’s coming next for Freeborn-Mower? 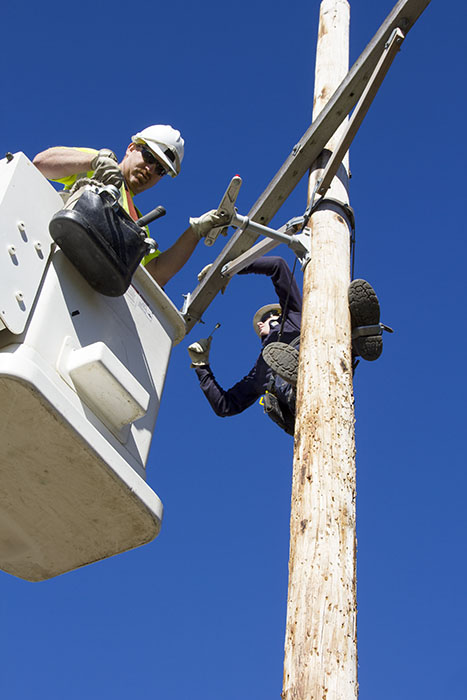 Cooperative prepares to grow more than 3 times in size

Freeborn-Mower Cooperative Services next year will be more than three times the size it is now.

After it takes ownership of the Alliant Energy operations in its territory in about eight months, perhaps longer, the cooperative will go from roughly 6,000 customers mostly in the rural parts of Freeborn and Mower counties to a little more than 21,000, to include urban Albert Lea and several area towns.

The growth leads to several questions: Will rates go up or down for former Alliant Energy users? What happens to Alliant Energy employees in Albert Lea? What happens with the big Alliant Energy building downtown and its other properties? Will Freeborn-Mower be able to take a heavier power load? Will the level of service be the same? What’s it mean to be part of a cooperative?

Jim Krueger, president and CEO of Freeborn-Mower Cooperative Services, has some of the answers, but for many, it is too soon to tell.

Alliant Energy announced Sept. 3 it will sell its electricity holdings in Minnesota to a dozen local electric cooperatives and its natural gas operations to Minnesota Energy Resources. Of the 12 cooperatives, Freeborn-Mower Cooperative Services stands to gain the most customers,

First of all, Krueger said there will be no problem with handling loads. Alliant’s system will handle everything just the same as it does now, only Freeborn-Mower will own it.

“From an operational standpoint, there is nothing to worry about,” he said.

In fact, Alliant Energy will remain the wholesale energy provider to Freeborn-Mower for the next 10 years, under the terms of the sale agreement.

Freeborn-Mower Cooperative Services has been providing power for 77 years, Krueger said, and knows how to run an electric utility.

“Our success in this transition will be measured by how seamless this is for our customers,” he said.

He hopes Alliant Energy customers will enjoy the Freeborn-Mower level of service, he said, and added that the biggest change for most will just be the name on the bill.

The Alliant Energy customers will go from being considered customers to being considered members because they will join a cooperative. That means, said Freeborn-Mower spokeswoman Mary Nelson, they are owners of the utility. There is a board of directors filled with members.

“Unlike customers of investor-owned utilities, you, as a cooperative member, have a say in determining the leadership of the cooperative, how it will operate and which services it will provide,” she said.

The members elect the directors, who then set policy and oversee the generation direction of the cooperative.

“We are guided by seven cooperative principles,” she said. “We believe in open membership; democratic member control; members’ economic participation; independence; education, training and information; cooperation with other cooperatives; and — above all — concern for our community.”

One next step for Freeborn-Mower, Krueger said, is educating its existing members and welcoming its new ones. That will include community meetings, he said.

The electric provider will join Alliant Energy in making an application to the Minnesota Public Utilities Commission in November. That’s when the regulatory process for the $128 million sale begins.

Krueger estimated the approval process would finish sometime in the second quarter of 2014.

He couldn’t say one way or another on the course of electric rates after the transition. However, he said Freeborn-Mower will be able to operate more efficiently because it will have a greater population concentration. Alliant’s territory has Albert Lea but otherwise is spread out along corridors. Alliant’s Minnesota territories are in southern Minnesota, with 45,000 customers spread over 15,000 square miles.

“It’s too early to talk about rates,” he said, but he added that more consumers allows Freeborn-Mower to more easily spread out pressures from costs, such as government mandates, inflation and unexpected wholesale fluctuations.

Freeborn-Mower has about 30 employees now, Krueger said. The company is getting ready for the expansion, and it will need more than merely linemen.

The plan is to make offers to the Alliant Energy employees in Albert Lea.

“Being able to hire those employees would be a great benefit to us,” Krueger said.

As for the downtown properties, it is likely that — in the long term — operations would move to the 12-acre campus Freeborn-Mower has at the intersection of East Main Street and Interstate 35. The downtown building probably will come up for sale down the road, he said, but first Freeborn-Mower will need to determine how to integrate what it acquires.

“We have no immediate plans to dispose of anything,” he said.

On Thursday, Krueger returned from a trade convention in the Twin Cities. It was a meeting of the National Rural Electric Association, and directors from six states were there. Many of his peers were excited about the deal with Alliant. Former Freeborn-Mower CEO Tim Thompson, who now heads the Lake Region Cooperative in Pelican Rapids, was congratulatory.

Krueger said the enthusiasm at the convention was another sign of why the deal made sense.

Watch the Albert Lea Tribune next week for a story on what’s next for Alliant Energy natural gas consumers.

Who’s got the power?

Here is a list of what’s next for electricity providers in Freeborn and Mower counties.

Alliant Energy-served cities to be negotiated because they are near borders of cooperatives: