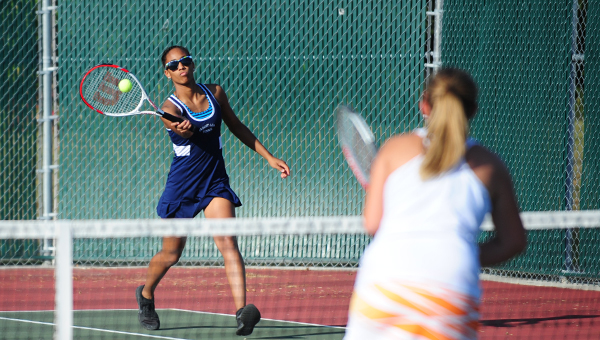 Lamanda Johnson of Albert Lea volleys the ball back to Winona’s side of the court on Tuesday. The team of Johnson and Carson McGivern lost 6-0, 6-1 to Winona in No. 1 doubles. — Micah Bader/Albert Lea Tribune

After 11 matches this season, the Albert Lea girls’ tennis team has made strides with technique. 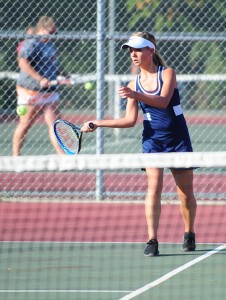 Mercedes Saltou of Albert Lea prepares to return the ball to her Winona opponent on Tuesday. — Micah Bader/Albert Lea Tribune

“Our serving and groundstrokes — our forehands and backhands — are the two areas where we really focused, and we’ve seen noticeable improvement,” said Albert Lea second-year head coach Matt Levorson. “It’s still a work a work in progress, but we’ve definitely moved forward in those areas.”

Levorson emphasized making a solid serve on the first attempt, as opposed to using the second serve option.

“We’ve really stressed that we want to make our first serve our primary serve, so we don’t have to use our backup,” he said.

With Tuesday’s 7-0 home loss to Winona, the Tigers fell to 0-11. However, after getting shut out in five of the first six matches of the season, the Tigers gained steam and began putting points on the board.

On Sept. 14, Albert Lea had its first breakthrough with a 3-4 loss at New Ulm against Marshall. Junior Kaitlyn Larson earned her first win of the season at No. 2 singles, outlasting Sabrina Olsen in three sets. Sophomore Mercedes Saltou swept her opponent at No. 3 singles, as did Elizabeth Ogukanbi at No. 4 singles. 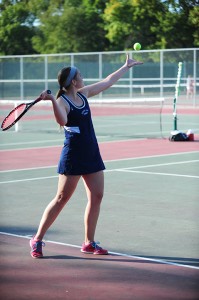 Levorson said he attributes their success on the court to their practice this summer.

“They were putting in the time on the offseason to make their game better,” he said. “All three of them have really improved.”

After a 6-1 loss at Blue Earth, where Ogukanbi won her second set of the season, the Tigers won two sets at Mankato East. Larson swept her opponent for the first time this season, and Saltou pushed her win total to two.

Underdahl has yet to win a set this season, but she took Lauren Moll of Faribault to three sets in the second match of the year at No. 2 singles.

On Tuesday, Levorson shuffled the order, and Underdahl played at No. 1 singles.

“We’ve got the Big Nine tournament coming up this weekend, and we want to make sure that we’re putting the players in the spot for them to have the most success,” he said.

“It was tough, but I like to play up to their level, ”she said.

Ellis moved from No. 1 doubles to No. 3 doubles, but she said her philosophy stayed the same.

“The three things we do are playing the ball deep, keeping the ball in play and rushing the net,” she said. “That is what we live by.”

Next, Albert Lea will host Rochester Century at 4:30 p.m. Thursday. After the Big Nine Tournament at Rochester Outdoor Tennis Center at 9 a.m. Saturday, the Tigers will play at the Section 1AA tournament Oct. 1.

Although the Tigers are still looking for their first match win, Levorson said that’s not what’s most important.

“The scores don’t reflect how we play and how we are as a team. As a team, we’ve got a great group of girls,” he said. “We’ve got a good thing going here. To have a team with a positive attitude is more important than winning or losing.”