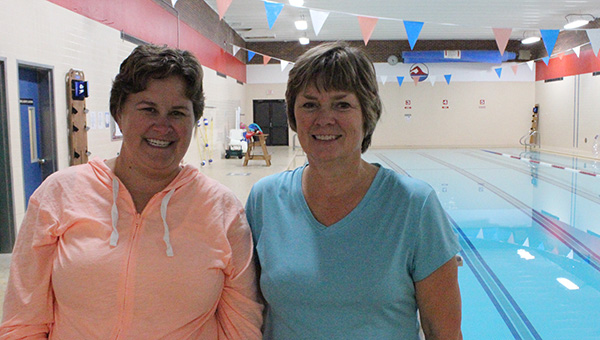 A deep water aerobics class has taken off in popularity at the Albert Lea Family Y. 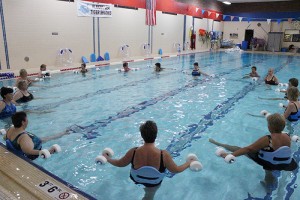 hes classes. Other instructors are Jill Nelson and Barb Osmundson. Sczublewski said there are many benefits to water exercise.

“After you’ve worked out you feel really good,” Sczublewski said. “There’s no soreness in your joints and you don’t get sweaty.”

Sczublewski said Bill Villarreal trained her because they needed a substitute instructor. She was taking the class and enjoyed it, then became a sub and then started teaching it regularly.

“I also went to the Austin Y to participate and learn new things,” Sczublewski said.

Sczublewski also enjoyed the summer Community Education water aerobics class taught by Annie Olson at the City Pool. She and the other instructors do most of the same workout moves, but sometimes do them in different order. That way it doesn’t feel too repetitive for participants. 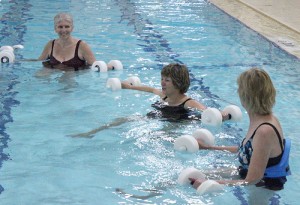 She often starts the class with 10 minutes of warm up exercises in the shallow end. Many participants wear waist belts as floatation devices. They also use aqua weights and pool noodles.

Sczublewski said that most of the workouts can be done at each person’s own pace, especially the walking and jogging. She has also worked out alternative exercises for people with health issues.

After warm ups is the hard work. They all head to the deep end of the pool for running, jogging and cardio moves to get their heart rates up. Sczublewski ends her classes with some stretching and cool down exercises.

“We try to work all the muscle groups,” Sczublewski said.

The class is open to members and non-members of the Y. For members it’s free, and for non-members is $40 for six weeks or $5 for each individual class. Also, anyone who buys an annual Y membership during the month of October gets the startup fee for half price.

The class isn’t all just work and no fun, though. Sczublewski said she enjoys chatting with the other participants and helping people reach fitness goals.

“You get to meet a lot of people and make friends,” Sczublewski said.