An Albert Lea dog is causing big waves in Chicago after she reportedly got loose Oct. 13 and caused a traffic jam on a major highway for more than an hour.

The dog, named Hope, was adopted by Dan and Mary Jo Dorman a few years ago after Dan found it abandoned near their home. Dan said the dog, a black pit bull terrier, appeared to have been abused and can sometimes get very nervous around other people.

He said he and his wife were in Chicago visiting their son Chris, who lives and works there. 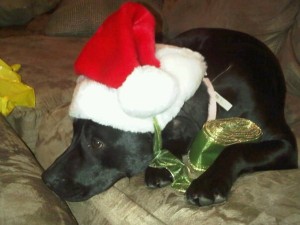 Hope, a black pit bull owned by Dan and Mary Jo Dorman, is causing a media frenzy in the Chicago area after she reportedly got loose from their son’s house on Oct. 13 and tied up traffic on the Kennedy Expressway for more than an hour. She has not yet been found. — Submitted

Dan said he and Mary Jo had gone for a bike ride while Chris and his roommates stayed home to watch a football game. Somehow Hope managed to get out of the house.

Chris’s roommates tried to chase Hope, which Dan said was the natural thing to do, but because she was believed to have been abused when she was younger, she got scared and ran.

The dog made its way onto the Kennedy Expressway near Chris’s apartment and reportedly tied up traffic for at least an hour, Dan said.

She has still not been found.

Since then, Dorman said he and his family are trying to spread the word of Hope on Facebook and other places.

He said his son and friends are working on putting up fliers, and he is working on a mailer to send out to homes within a certain distance of where she went missing.

He has received emails from people who think they have spotted her.

“We’re asking people to post it and retweet it,” Dan said.

Hope was given her name by one of Mary Jo’s students, who said the Dormans gave the dog a new life after it was abandoned.