A new column, a new wife and a fresh view

Column: Things I Tell My Wife, by Matthew Knutson

“I’m pretty sure you meant to say Alfalfa,” I said to my wife. She had just commented on the hairs in the back of my head sticking up, calling them my “alpha-alphas.” 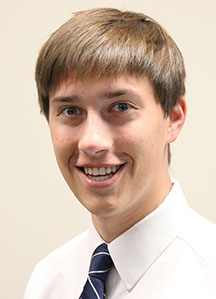 Alfalfa, the classic character in “Our Gang” and “Little Rascals” films has a prevalent cowlick. My wife still won’t admit she was wrong. It’s times like these when I know I married the right woman.

We’re newlyweds, married just this August, and she’ll certainly be the subject of many of my columns. I suppose a proper introduction of sorts is necessary. I’ll introduce her first, since she’s far more interesting.

Sera, my beautiful wife, was born in Madagascar and raised in several countries across the world, including Papua New Guinea, Australia, England, America and Kenya. Her dad was the first Lutheran missionary out of Madagascar. In 2007, coincidentally six years to the day that we got married, she arrived in the United States to attend Waldorf College in Forest City, Iowa.

Conversely, I grew up just north of Albert Lea in Owatonna and may have left the country once or twice depending on how far north we ventured on one of my family’s vacations in the Boundary Waters.

We met as freshmen at Waldorf but didn’t begin dating until the day after my birthday in our senior year. We became engaged this April on the day after her birthday, and the rest is what they call history.

I’ve decided to title my column, “Things I Tell My Wife” because it seemed appropriate to document this stage of our lives. The exciting wedding day is over, and now it’s just us and a pet fish.

I recently read an article by Nicki Lamont in Converge Magazine about how our culture builds up an expectation of engagements and marriages for people in their mid-20s, but once the excitement has passed, sometimes couples forget that they did more than just plan a big party.

She astutely stated, “In this wedding-obsessed world, I think we all need to take a breather. Instead of watching ‘Four Weddings’ marathons and downloading The Knot app when we feel like we’re ready for a wedding, we need to look at our relationships and start thinking about what it means to marry our significant others.”

Perhaps it’s time to celebrate the weeks following the wedding. That’s what I’m hoping to do here. I find humor daily in my relationship with Sera as we continue to discover our new roles as husband and wife, and I hope you’ll find it humorous, too.

Just the other night my wife came to bed jokingly upset because I was still putting my toothbrush away in the drawer instead of our new toothbrush holder. Apparently her toothbrush was getting lonely.

Speaking of toothbrushes, I feel like I must mention David Behling in my first column since without his involvement I certainly would not be writing this. Professor Behling will always be that unusual professor who one day had a toothbrush in the front pocket of his button-up shirt. Being that the course was titled Critical Inquiry, I couldn’t help but wonder if he was just waiting for one of us to ask why it was there, or if in fact asking about it would be crossing some sort of professor-student boundary that existed perhaps only in my freshman imagination.

Several weeks ago Professor Behling visited my office in the marketing department at Waldorf and told me that he’d no longer be writing “Notes from Home” for the Tribune because he’d be shifting his focus to other pieces of writing. It was certainly a surprise when he suggested I try writing the Friday column.

For those of you not interested in newlywed bliss, this column certainly won’t be all about my marriage. In fact, if I didn’t see a necessity to introduce myself in the first column, I’d likely be writing about the current government shutdown. I’ve tabled that idea for now, but it’s likely a similar column will be coming in the future. Thanks for reading, and if you have any suggestions for taking care of my “alpha-alphas,” don’t hesitate to let me know.

Matthew Knutson is a marketing specialist at Waldorf College in Forest City, Iowa.