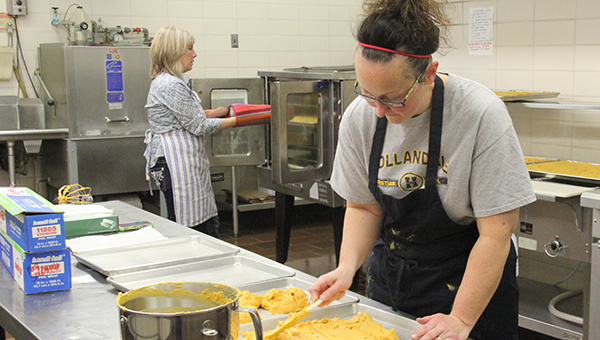 HOLLANDALE — It’s a feast and a fundraiser, and it’s coming to this small town.

Hollandale Christian School hosts its annual fall supper from 4 to 7 p.m. this Friday. Students, their family and friends, community members and school staff will gather for a feast and to raise funds for the private school’s general fund. 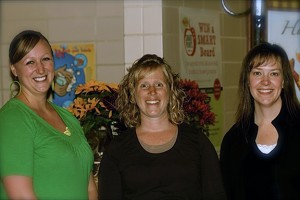 From left are Jenny Iverson, Tina Feuerhak and Coletter Bauers. The three were co-chairwomen for the 2012 fall supper, and all three are helping organize this year’s event as well. –Submitted

The work has already started on the homemade foods to be served on Friday. Three women on the dessert committee, Theresa Blizzard, Lauri Olson and Angie Pazurek, were at the school making brownies and pumpkin bars on Tuesday.

New this year are the pumpkin bars, which they plan to cover with cream cheese frosting. Another dessert to be served are the famous almond bars, which the women said were a hit last year.

“Everyone wanted that recipe,” Olson said.

The three women were enjoying making large batches of bars in the school’s kitchen. Pazurek said she likes being able to chat with other parents while preparing for the event.

“Most of the events are for the kids,” Pazurek said. “This is an event where all the grown-ups are here and you can get to know other parents.”

Most of the parents have helped for multiple years now. Olson said this is the 13th supper she has helped with, and she said somehow it goes more smoothly each year.

Volunteers prepare enough food for about 1,000 people. It all depends on the weather to know how many people will show up. Last year the event served about 800 people, and almost $5,000 was raised.

Donations are accepted by supper attendees, and a take-out option is growing in popularity. Organizers said they will pack up a meal, or a few meals, for those who can’t make it to the event.

The menu will include ham, mashed potatoes, stuffing, carrots, baked apples, Chinese salad and bars for dessert. The public is invited.

This will be the 31st year for the supper, which has been feeding patrons and benefiting students since it began in 1982. The fundraiser often collects anywhere from $7,000 to $8,000. Funds raised go to the school’s general fund and helps fulfill classroom needs.

The event is one of the main fundraisers the school holds. Its largest fundraiser is an auction each spring. The Christian school educates students in kindergarten through eighth grade.

How much: donations accepted